This one is supposed to lead me to choose some romantic couple from comics. Maybe Scott and Jean from the X-Men, or Peter and Kitty from the same, or maybe Dan and Laurie from Watchmen or even Apollo and the Midnighter from the Authority. But I'm going to go a different way and pick a double act or partnership. My favourite couple in comics is Johnny Alpha and Wulf Sternhammer from Strontium Dog. 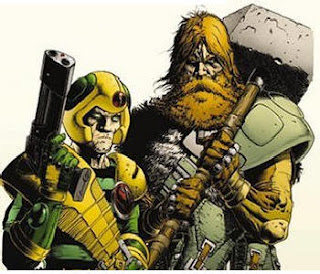 Alpha is a mutant bounty hunter and Wulf is his actual Viking partner. Both from the 2000AD strip Strontium Dog. To quote another SD fan, Simon Pegg, their stories are a slice of fried gold.
Posted by Eamonn Clarke at 11:18 AM No comments:

Wolverine! Enough already. If ever there was a character that needed a rest it is the old "best there is at what I do, but what I do isn't very nice." himself. Look he can't be in the X-Men and the Avengers and have his own solo book all at the same time. It's daft. 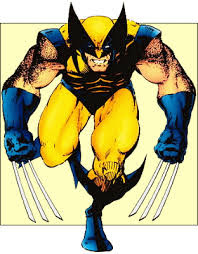 And the yellow uniform is just ridiculous.

Having said all that, it is still possible to do something interesting with him. If you haven't read any of the Wolverine or X-Men books for years then get Old Man Logan. It is the Dark Knight Returns of the Marvel universe and is really rather good.
Posted by Eamonn Clarke at 12:53 PM No comments:

Day 05 - Comic character you feel you are most like (or wish you were).

Tricky question. Not sure how I let this one slip through but then it is supposed to be a challenge so ...

As much a I wish I was like Alf Tupper, or Joe Dredd (well, the older Dredd perhaps), Brian Braddock, or even Peter Parker, the character I most identify with is Daniel Drieberg, the second Nite Owl in Watchmen. 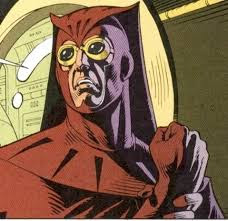 Actually Drieberg is a bit of a mess to be honest. He has his secret basement of cool gadgets and super-toys but he just sits around doing nothing while the world slips towards disaster. He is the middle aged superhero who has gone to seed. However, to look on the bright side he does end up with Laurie Jupiter so it's not all bad!

I changed my mind about this category twice in the last 24 hours so I could easily choose someone different if asked tomorrow,
Posted by Eamonn Clarke at 8:41 AM No comments:

I'm not sure about this one. I've sort of got past the feeling guity about reading comics now. Heck, I'm blogging about it, loud and proud. However I have sort of moved on from superheroes which I guess leaves me with just one character as a guilty pleasure. 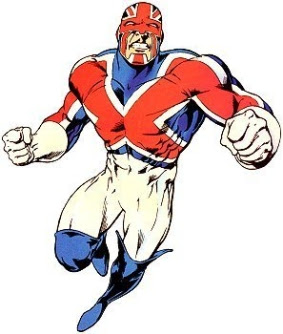 I love Captain Britain. Especially in his 1980s incarnation, when he wasn't all that bright but meant well. I also liked his one liner when he dispatched the Skrull bad guy in the more recent Captain Britain and MI 13:
"We're British. We don't like to make a fuss."
Posted by Eamonn Clarke at 9:03 AM No comments:

The Ballad of Halo Jones started in 2000AD in 1984 and is just a revolutionary idea for a comic that at the time was full of stern lawmen, renegade robots, dinosaurs and violent resistance fighters. Into this very masculine world Moore and artist Ian Gibson introduced a female character, and a female character who had no special powers or abilities. Halo Jones was just an ordinary person who ended up doing extraordinary things because she felt trapped in her mundane life. The three books explored different chapters in her life and were just remarkable stuff for 2000AD. Underrated but recommended.
Posted by Eamonn Clarke at 8:53 AM No comments:

Slightly harder one, with so many to choose from but I'm going to go for the character that really got me back into comics after my initial gateway with Warrior magazine.

So it's Swamp Thing 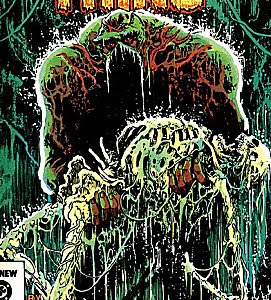 And in particular Alan Moore's Swamp Thing, a creature who thought he was a man and found out it wasn't and yet became somehow a more human character in the process.
Posted by Eamonn Clarke at 10:29 AM No comments:

This is a nice easy one to start with.
The first comic I can remember reading is

The Victor. A very British 1960s comic full of tales of war heroes and remarkable characters. My favourite was, of course, Alf Tupper - the Tough of the Track. 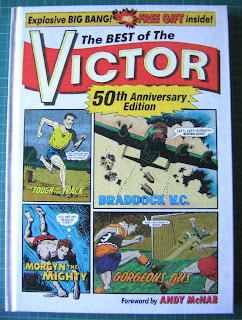 Thanks, Dad.
Posted by Eamonn Clarke at 8:35 AM No comments:

30 day challenges seem to be a common blog theme (bleme?). I've looked at some of them with a view to doing my own. I'm tempted by doing one on horror films, science fiction or concentrating on Doctor Who as Paul from the TimeVault podcast is doing at the moment. However I'm going to go with a theme that I'm a bit more familiar with and am going to have a bash at a 30 day Comic books challenge as follows:

So Surface Detail by Iain M Banks. The latest in his series about the utopian Culture, a civilisation of humans and AIs all living in perfect harmony, which would be quite dull if the Culture could resist the temptation to interfere in the affairs of other, last enlightened races. But meddle they do and with entertaining results.

The problem is that the AIs or Minds are so all-powerful that it becomes increasingly hard to see what point the human characters have. At the end of his last Culture novel Matter Banks had to create a convoluted situation that prevented one of the Mind piloted ships from intervening so that it was left to humans to save the day.

In Surface Detail there are plenty of human characters but they seem more like a sideshow while the Culture ships get on and do their thing. One ship in particular seems to take events into its own hands (or should that be maniple fields?) and regards humans as little more than an annoyance.

Anyway it was a good read on the Kindle, especially now that the publishers have reduced the e-book prices below the crucial £5 barrier. There is a twist in the epilogue which it is difficult to discuss without spoilers. Let's just say it refers back to an earlier novel but seems a little strange. Maybe it will set up the next novel?
Posted by Eamonn Clarke at 4:53 PM No comments:

Court of the Air

So my Dad and I tried an experiment. We both read The Court of the Air by Stephen Hunt at the same time on our Kindles. This was the Steampunk book I was talking about. Hunt has created an alternate version of our world with the British empire replaced by a country called Jackels, and this is the first of several stories set in this Steampunk world. The plot is rather complicated as two children get caught up in the political and military entanglements of this bizarre land which is both very similar to, and very different from England. You can get an idea of their separate stories in the trailer on the author's website.

Our initial reactions were rather different. I have to confess that I found it very confusing, the story hits the ground running and there is little in the way of explanation. My Dad on the other hand, loved the world building and compared it to a radio play which requires you to use your imagination to fill in the spaces. We both liked the Steam-men who are steam powered robots who seem to have their own nation-state and religion and get dragged into the conflict in the book.

By the end of the book I was still confused and probably won't be rushing to try any of the other books. Dad enjoyed the book more than I did but was frustrated by the unresolved loose ends. He will be carrying on with the series so may find the answers to some of the mysteries that baffled me.

All in all an interesting experiment. By coincidence the book Dad finished just before starting this was Ian M Banks' Surface Detail which was the book I read next. So notes on that to follow.
Posted by Eamonn Clarke at 2:30 PM No comments:

Posting this mainly for my Dad to see.
Looks interesting.
Barsoom!
Posted by Eamonn Clarke at 1:16 PM 1 comment:

So here's a thing. A while ago I read a BoingBoing post about a curious book called Swallow by Mary Capello. It's a history of the American Laryngologist Chevalier jackson who devoted his life to perfecting the removal of inhaled and ingested foreign bodies from his patients. He kept all the strange objects he retrieved and arranged them in display cases for the education of others. His collection survives in the Mutter medical museum in Philadelphia. Mary Capello, who is a Professor of English, stumbled across the collection and was inspired to research and write the story of Jackson's life.

I bought the book from Amazon and it was just as fascinating as the description above suggests. Anyway I wrote a review of the book for the British Medical Journal who have just published it. You can read my full review here.

I'm in the BMJ which is quite cool indeed.
Posted by Eamonn Clarke at 10:46 AM No comments:

Email ThisBlogThis!Share to TwitterShare to FacebookShare to Pinterest
Labels: books

I recently read book 14 of Robert Kirkmans' The Walking Dead, a successful comic book series that has become a hit TV show starring Andrew "Egg from This Life" Lincoln.

In brief this volume suffers from the same problem common to post-apocalyptic drama that I have mentioned before. Cory Doctorow is a science fiction writer and well known tech blogger. His own posting about this volume on BoingBoing neatly summarises the attraction and at the same time the problems with the genre.
Posted by Eamonn Clarke at 10:07 AM No comments: