I've skipped a couple of the Hammer Frankensteins to get to Frankenstein Created Woman from 1967 with Terence Fisher back on board as director. 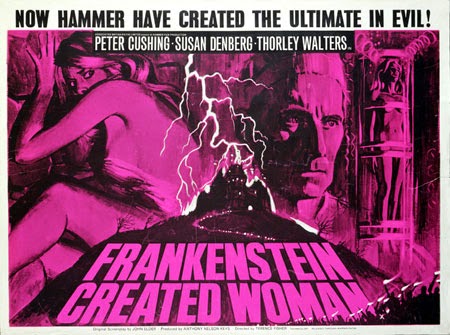 Baron Frankenstein is in a new town and quietly carrying on with his experiments. Meanwhile a trio of nasty toffs frame a young man for murder, and his execution leads his disfigured girlfriend to commit suicide. With two bodies on his hands Frankenstein creates the perfect woman and transplants her boyfriend's soul into her beautiful form. As soon as the bandages are off she becomes the ideal vehicle of revenge, luring each of the villains in turn to a bloody death.

The Playboy model Susan Denberg is surprisingly good as both incarnations of the tragic Christina, and Peter Cushing is as charismatic as ever. Out of the rest of the cast a young Derek Fowlds stands out as one of the bad guys, years before he would go on to Yes,Minister or Heartbeat, or even his stint as Basil Brush's straight guy. 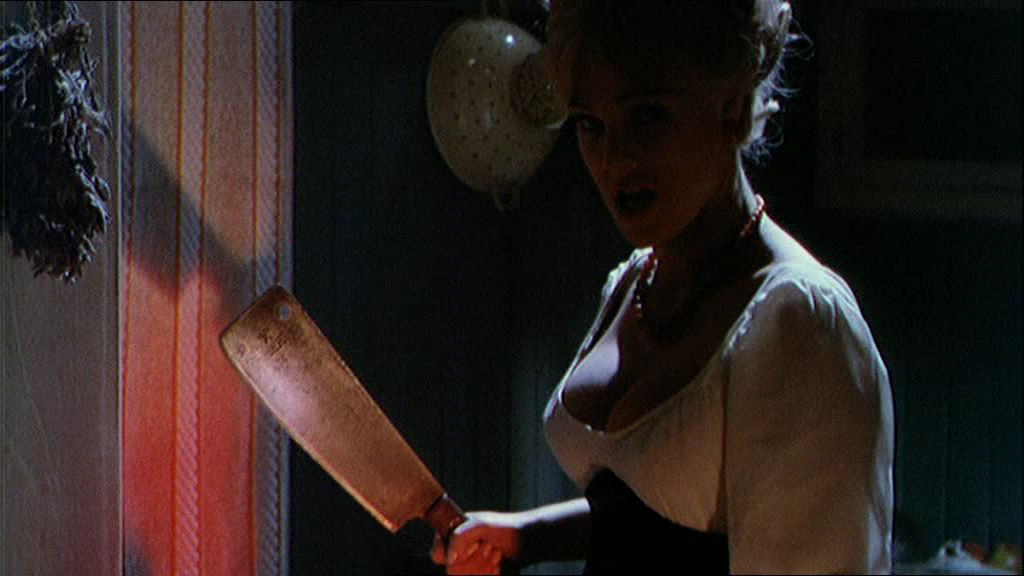 It's a surprisingly bloodless Hammer film. There's no grisly surgical detail and the killings are mostly off camera. At least Denberg provides the heaving bosom to distract the bad guys from the sharp implements in her hands. Cushing does some athletic leaping about rooftops but for the rest of the movie he's fairly quiet and restrained and Hammer seemed to be hoping that Denberg's charms would win the audience over. A fairly enjoyable romp but not a classic, three out of five guillotine blades and onwards.
Posted by Eamonn Clarke at 11:27 AM No comments:

Finishing off my Predator box set with Predators from 2010, directed by Nimrod Antal. 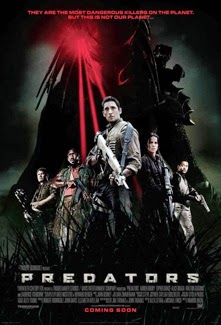 A mismatched bunch of killers find themselves parachuted on to an alien planet where they become the hunted prey of a trio of super Predators. Adrien Brody sets aside his art-house credentials to beef up and do that hoarse tough guy voice that Christian Bale's Batman is so fond of. There's loads of guns, the usual tricks and traps, and Brody even gets smeared in that all important mud. The Predators themselves are bigger, nastier and somehow less frightening than their predecessors and it is all rather dull. 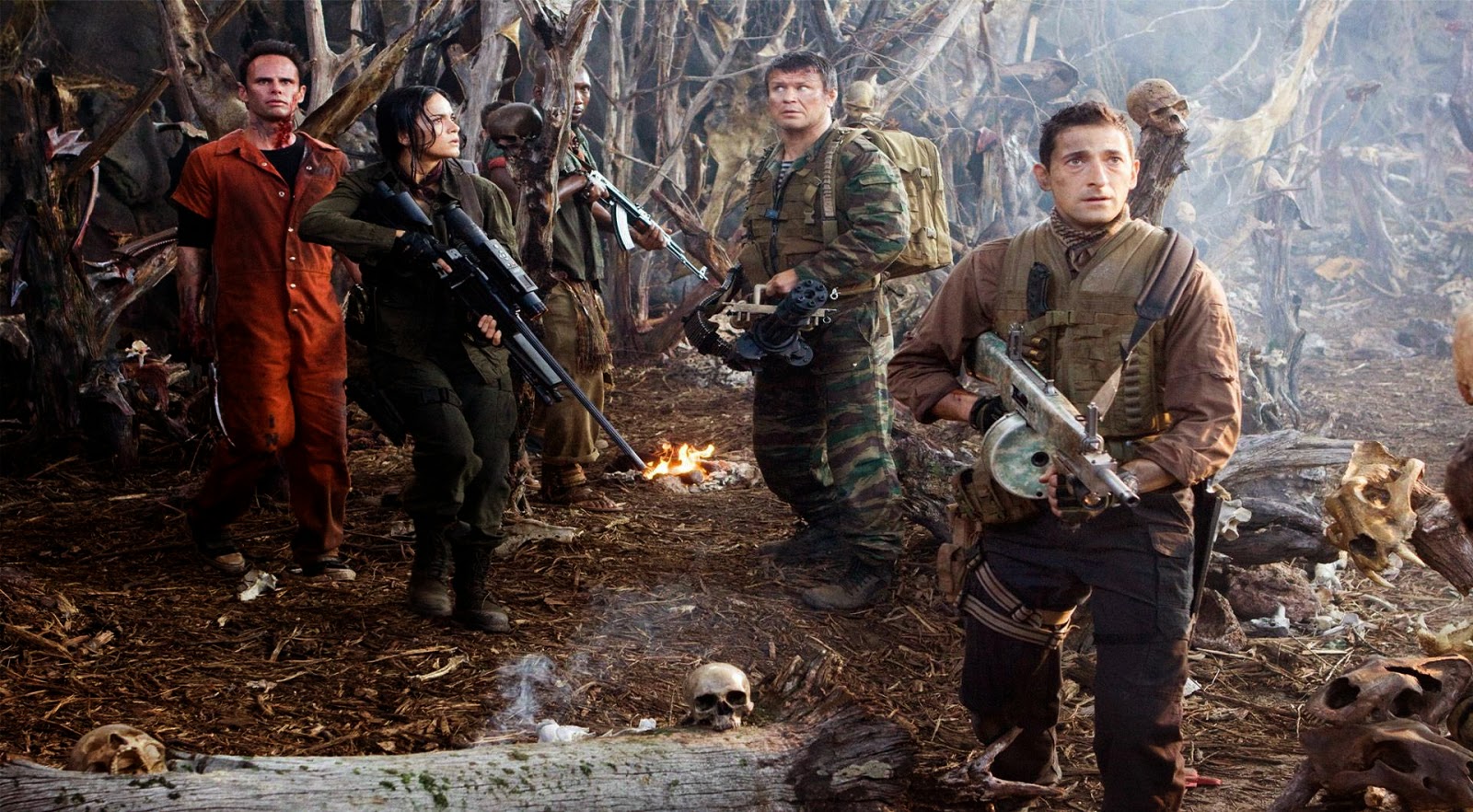 The magic spark from the first film is still missing and while all the special effects are extremely competent and none of the performances are bad it all just falls flat. Plus there is the huge mystery at the centre of the film about what Laurence Fishburne has been surviving on.

It's not as terrible a film as the second in the franchise but it just washed over me without any real excitement. Two stars and time to put these extraterrestrial monsters away and concentrate on the home grown horrors of Hammer.
Posted by Eamonn Clarke at 9:13 AM No comments:

Dracula has risen from the grave from 1968 is the third of the Hammer vampires that count. Freddie Francis took over as director and does some interesting things with colour filters whenever Christopher Lee is on screen. 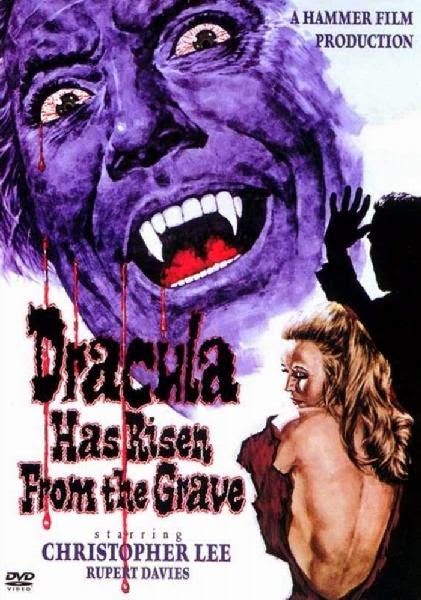 A clumsy priest falls and cuts his head and soon the blood has dripped through the ice to the frozen Count who having completed his own version of the ice bucket challenge is up and about terrorising the roof tops of another non-specific European town. There are the statutory heaving bosoms, two of which are provided by the gorgeous Veronica Carlson, and of course Michael Ripper is on hand as a friendly baker and innkeeper.

Lee is given some lines to speak and more to do but I sense that Hammer are struggling to know what to do with him. Invading attractive women's bedrooms to ravage their necks is all very well but he doesn't seem to have any grander plan, and it's only a matter of time before the vampire hunters are on his trail for another desperate race against the sunrise as those familiar black horses carry him back to his castle. Which, incidentally, has had a bit of a facelift and been moved up into the mountains since we last saw it. Hammer had moved production from Bray to Pinewood studios so there are all new sets to play with. 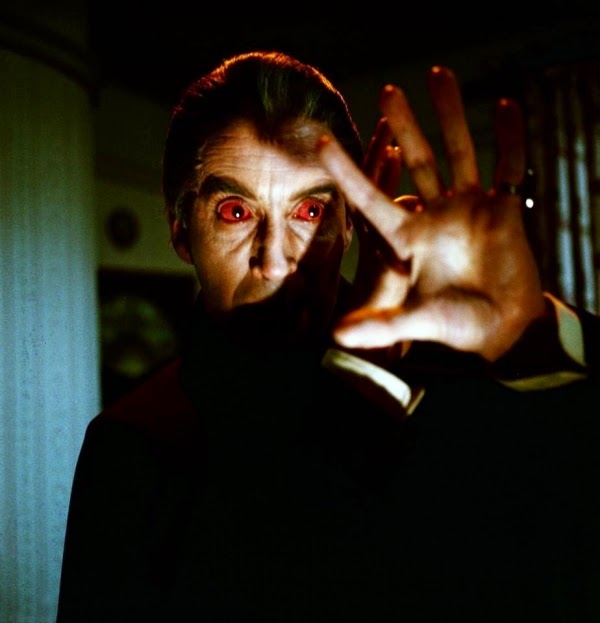 As well as the weird colour filters Freddie Francis also gives us lots of close ups on Lee's bloodshot eyes which look very uncomfortable indeed and presumable involved some more hard contact lenses. Lee is as imposing as ever but the whole film seems to add little to the canon apart from a spectacular new way to kill the Count. It's  middling three out five fresh baked strudels for the third film and time to see with the Baron has been up to since his first outing.

Posted by Eamonn Clarke at 10:24 AM No comments:

Hammer cracked out The Plague of the Zombies using the same crew, the same sets, and some of the same cast as The Reptile as the two films were filmed side by side by John Gilling. 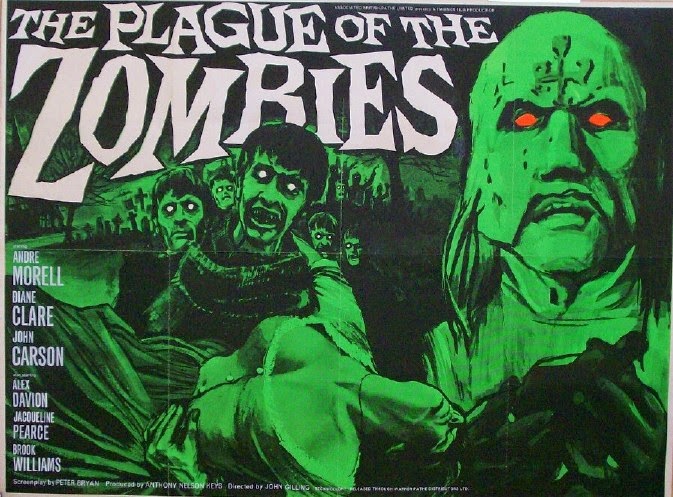 Once again there are two outsiders brought to a Cornish village because of a string of mysterious deaths and disappearing bodies. The locals are unfriendly to the new people even when one of them is a distinguished Professor of medicine whose former colleague, now the local GP, has summoned him. But the GP's wife, played by the equally doomed Jacqueline Pearce is not at all well and seems in thrall to the sinister local squire who lives in a rather familiar big house.

Possibly the greatest Professor Quatermass Andre Morell is brilliant as Professor Forbes who represents a mix of Quatermass, Doctor Who and Van Helsing all wrapped up into one. Michael Ripper trousers another pay cheque, this time as a sensible police sergeant who is soon acting as backup for Forbes. And yet again there's lot of grave robbing to bring up a succession of empty coffins and all filmed on exactly the same set as the Reptile. I'm sure they coordinated the diggings to fit both films, 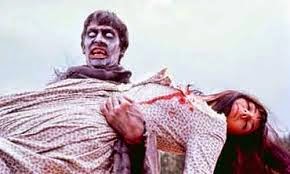 But of course we want Zombies and before long they appear with their flaky grey face make-up, painful looking complete white contact lenses, and strange monk like sacking robes. Their appearance provokes many a scare and one notable dream sequence that pre-dates the Romero horrors to come one year later. However when we learn that evil Squire is killing off the locals, turning them into zombies, and then setting them to work in the tin mine beneath his house it does seem rather a waste of the potential horror of a new Hammer monster. Well it is a creative use of a wage-less workforce to create capital. Left unchecked the Squire would probably have gone on to a seat in the House of Commons or a job at a city bank. But despite his voodoo powers and his always on tap trio of tribal drummers he is doomed for a sticky end as his workforce turns on him in a zombie occupy movement against the 1%.

And the big house goes up in smoke again, or probably at the same time as in The Reptile. The presence of Andre Morell makes this a success along with the genuinely creepy zombies who would be much more effectively used by Romero, although interestingly Hammer had spotted their potential as a signifier of social injustice. Plenty of good bits in this film, four out of five uncomfortable zombie contact lenses. And next we'll find that fangs ain't what they used to be.
Posted by Eamonn Clarke at 9:15 AM No comments:

Continuing my exploration of this Hammer box set with The Reptile from 1966, directed by John Gilling. 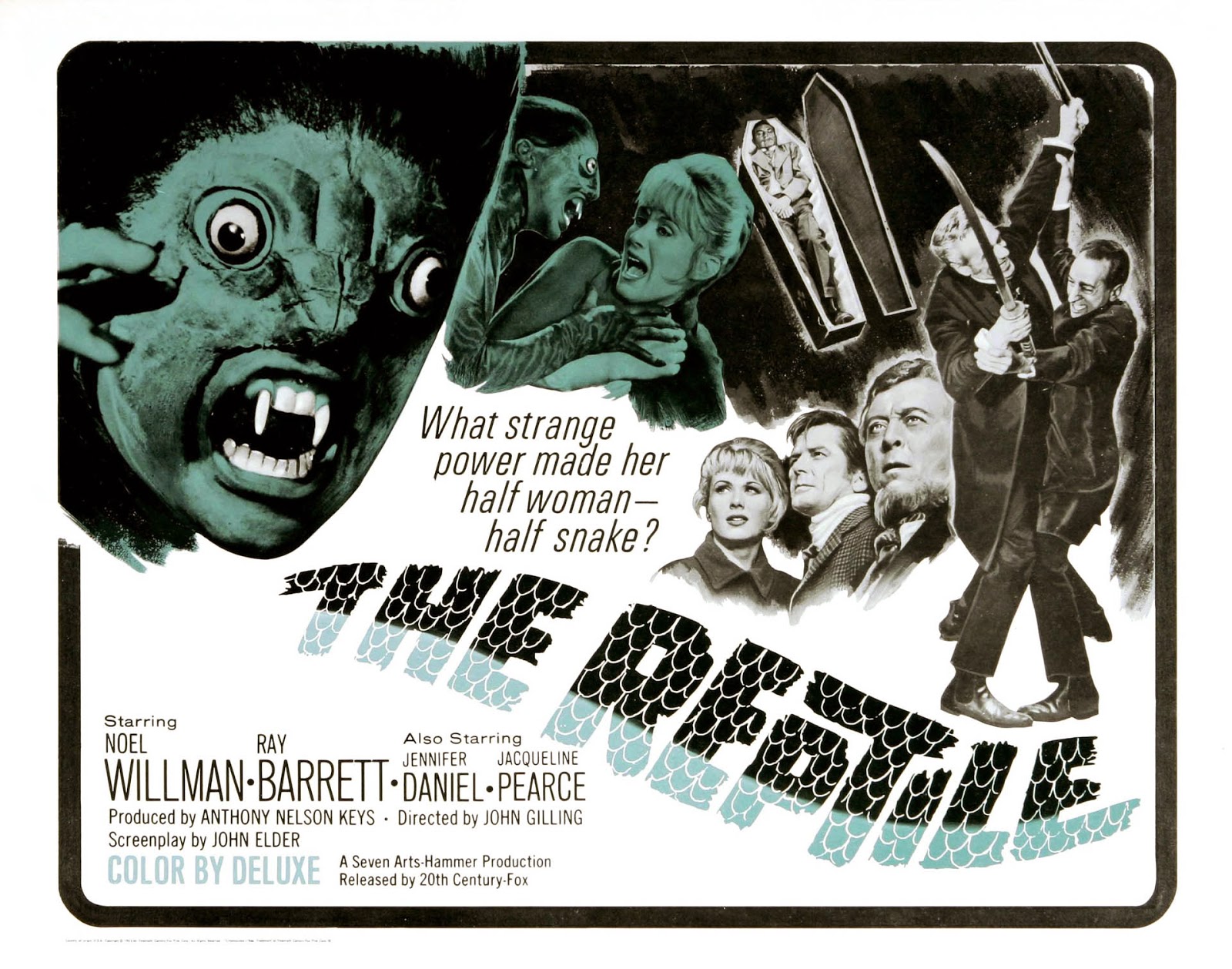 A couple inherit a charming cottage in a village where people are dying from a mysterious black death. With the help of the ever reliable, and ever present, Michael Ripper they investigate and find that a local doctor may be hiding a dark secret about his daughter and a strange curse they have brought back from India.

Jacqueline Pearce who would go on to play the sinister Servalan in Blake's 7 provides some youthful beauty as the daughter before she has to don the rather poor Reptile make up in her were-snake transformation. Apart from that there's a fair bit of digging up bodies to try and find out how they died, before the secret is revealed and the big house goes up in smoke. 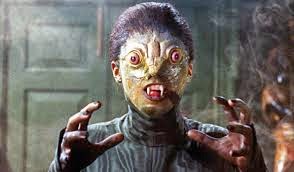 It's a brave attempt by Hammer to create their own monster myth but it's all a bit dull and the revealed Reptile is just not very scary. Apart from Michael Ripper the cast are fairly anonymous and it all drags a bit to its 90 minute ending. A mere two out of five Indian sitars and on to the other picture that was shot on the same sets at the same time, Plague of the Zombies.

Posted by Eamonn Clarke at 12:37 PM No comments:

Neck in line for the throne

It took Hammer eight years to persuade Christopher Lee to don the cape again for Dracula: Prince of Darkness. Once again Terence Fisher directed, sadly no Peter Cushing this time, so Andrew Keir fills in as Father Sandor. 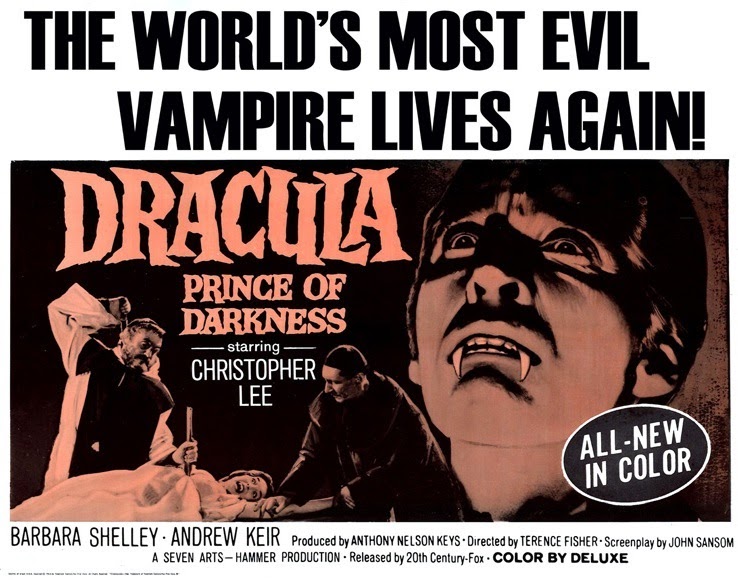 Four British tourists find that there is no such thing as a free lunch when they stumble upon Dracula's castle and the supposed hospitality of his loyal servant Klove. Before long one of them is hanging upside down bleeding over Dracula's coffin leading to a lovely special effects sequence as the Count's body rebuilds itself. The rest is mostly familiar stuff with the usual Vampire conventions. Keir provides a reassuring presence as the new Vampire hunter, and Francis Matthews makes a good lead. And of course there is a marvellous turn by cult horror legend Barbara Shelley who gets to utter the great line "There will be no morning for us" before her husband provides the liquid component for Dracula's regeneration and she joins the ranks of the undead.

In usual Hammer fashion it rattles along in a tight 90 minutes leading to a splendid chase and the finale as Dracula is trapped on thin ice with Sandor firing bullets to crack it and send him plunging to a watery doom. Quite why Dracula allows running water around his castle is perplexing but best not dwelt on. The other strange thing is the decision to have Dracula remain mute throughout the film. Depending on who you you believe this was either due to Lee refusing to say the lines, or the writer Jimmy Sangster not writing any for him. Either way it does detract from Dracula's established urbane menace which is a shame.

It's a four star film mainly for the performances of Lee, Keir, Matthews and Shelley. This is my first film from a Dutch box set of Hammer classics which also includes the Quatermass movies which kickstarted the Hammer story. Next up may well be some British zombies.
Posted by Eamonn Clarke at 10:33 AM No comments: