This is Big Finish release number 33: Neverland starring Paul McGann as the eight doctor and India Fisher as Charley Pollard, written by Alan Barnes and directed by Gary Russell. 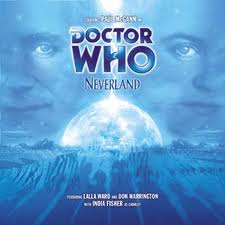 I've jumped back to a much earlier release in the Big Finish line because this story sets the scene for the huge adventure of Zagreus that marked the 50th release for Big Finish. I picked up Zagreus and some other stories in a cheap eBay package but more of that another time.

I'm really enjoying Paul McGann's Doctor in these audio dramas. He is an excellent actor who seems to understand perfectly what is required in a radio play. He is on fine form again here in an adventure that takes him back to Gallifrey and to dark events from the history of the Time Lords. Lalla Ward reprises her role as Romana and Don Warrington turns up in an important role.

There's a mystery that can only the Doctor and the Tardis can solve and it may relate to a mysterious figure from a nursery rhyme known only as Zagreus. Can this character from fiction and fable actually exist? And how is the Doctor's companion Charley Pollard mixed up in all of this? She goes from being a peripheral observer to becoming the central figure in a maelstrom that may affect time and space forever. I was reminded of Rose Walker in Neil Gaiman's Sandman comics who finds herself as the unwitting nexus of a huge disaster.

All in all this was another great Doctor Who audio adventure with all the actors giving good performances. I'm going to give this 4 out 5 R101 airships. Next up is the madness of Zagreus with, by my reckoning, five Doctors and at least twelve of his companions.
Posted by Eamonn Clarke at 3:21 PM No comments:

A new year and a new 2000AD prog to review. Abalom is back which is great, and Judge Dredd begins a new story arc in the build up to the Day of Chaos. This is part one of Eve of Destruction and the tension is really building up. In the aftermath of the raid on the Sov-Judges' research bunker Dredd meets with the Mega-City's chief microbiologist to discuss the likely nature of the bio-weapon that is heading their way. 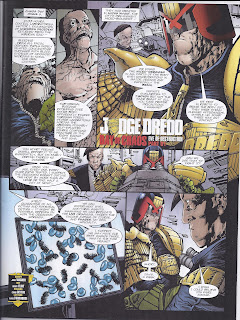 They begin with some fairly graphic descriptions of the effects that the Chaos organism had on its victim. All quite gruesome stuff that sounds like the rage virus from 28 Days Later. Dr Wyant points out that the super-bug is similar to Toxoplasma Gondii as discussed in my previous blog entry, but gives the writers a get out clause by noting that this is "not the same beast at all".

Unfortunately the confusion between a virus and a protozoa continues. Anti-virals are not going to be of any use against even a mutated form of Toxoplasma. Once again the doctor mentions his own speciality of Phage therapy which may offer the best hope for Mega-City One, and is more realistic.

And then there is a computer screen image of the victim's blood. Henry Flint gets the shape of red blood cells right, and although T.Gondii isn't a spiky beastie as shown here it does have a curved crescent moon shape so this picture is not bad as a portrayal of a mutated killer protozoa. Maybe they looked at an image of T.Gondii parasites like this one. 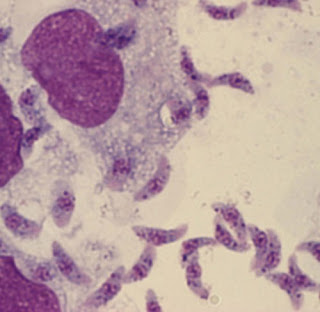 The medical rating drops a bit for the continued confusion about micro-organisms, so this gets 3.5 out of 5 medic-droids. But the almost unbearable sense of expectation and, let's say it - dread makes for a great storyline. Unlike the surprise attacks of Block Mania and The Apocalypse War this time the Mega-City Judges know exactly what is coming but seem almost powerless to stop it. Great stuff for 2012.
Posted by Eamonn Clarke at 12:20 PM No comments: