Wham bam! and straight onto the Crimes of Thomas Brewster by Jonathan Morris and directed by Nicholas Briggs. 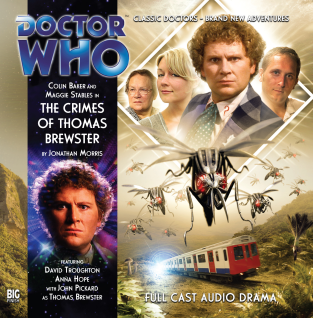 Lots of stuff going on in this story. The Sixth Doctor meets up with Thomas Brewster. He also encounters Detective Inspector Menzies (although it's the first meeting for him but not for her, if you see what I mean in a timey-wimey way). And it's his first adventure with Philippa 'Flip' Jackson who may be returning soon as another Sixey companion. In amidst all these comings and goings there are swarms of robotic Mosquitoes, a malevolent alien race called the Terravore, a sentient planet, and a telepathic force known as the Locus. All this and Evelyn Smythe as well.

I must admit I've been struggling with the Sixth Doctor of late. He's a grumpy old curmudgeon sometimes, but team him up with Dr Smythe and you have a winning combination. Something about her no nonsense, down to earth approach seems to work well to temper the more extreme elements of the Sixth Doctor's personality. It's also clear that Colin Baker and Maggie Stables get on well together and seem to be having a lot of fun with their characters. It's a great shame that a period of ill health is preventing Ms Stables from doing any more stories at present, she has been one of the best things about my Big Finish listening experience.

I am less sure about Thomas Brewster. I know I have missed out two parts of his adventures with the Fifth Doctor that followed The Haunting of Thomas Brewster, and maybe they would have convinced me about him. He just seems a bit dull at the moment and his part in this adventure could have been filled by any of the lesser characters. Meanwhile it's nice to have Anna Hope back as the laconic but efficient D.I.Menzies in her third adventure with the Doctor. I hope she comes back for more, or maybe a spin off one shot story called Menzies Investigates!

Having David Troughton show up in Doctor Who is always nice because it reminds us of his father. I am curious why Sean Pertwee has never done any Big Finish or television Who, I'm sure he must have been offered? Anyway Troughton is great, and Lisa Greenwood and Ashley Kumar provide good back up as Flip and Jared.

This time the music fit right in and didn't bother me at all, and with Nick Briggs' ever reliable direction it all trips along nicely and is one of the better Sixey stories I can recall listening to recently. 3.5 out of 5 mechanical mozzies. And onwards to The Lady of Mercia

Posted by Eamonn Clarke at 5:48 PM No comments:

From 2008 comes The Haunting of Thomas Brewster by Jonathan Morris, directed by Barnaby Edwards. 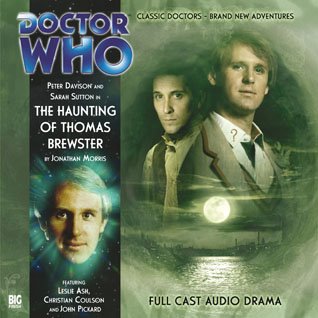 The Doctor and Nyssa are adrift in Victorian England without access to the Tardis. The Doctor seems to have set himself up as a Gentleman scientist with a new companion, Nyssa is somewhat perplexed, and a young man called Thomas Brewster is being haunted by his dead mother.

Well, it has haunting in the title so I was expecting some ghostly goings on, and for a while it was pretty good. Eventually the Doctor has to explain that the mysterious events are due to the usual alien invasion and it all deflates somewhat. Why can't Doctor Who ever feature a real ghost? OK so there is no such thing as ghosts, but in reality there is no telepathy or time machines. We accept them as part of the Whoniverse but all the hauntings turn out to be caused by aliens. Hopefully someone will read this and point me to a Big Finish or original series story with a real ghost.

In the mean time this story is a fairly good Fifth Doctor adventure and I did like the idea of him spending one year living in Victorian London as a scientist and speaker at the Royal Society. As Brian my co-host on British Invaders pointed out it would be fun to hear further stories from that missing year without the Tardis at some point. I also enjoyed his new companion Robert McIntosh, and rather hoped that he would become a continuing character instead of Thomas Brewster. Peter Davison is very likeable as ever, Sarah Sutton doesn't have much to do, and the supporting cast of Leslie Ash, Christian Coulson and John Pickard are all good. The cover art is suitably atmospheric and there are some nice street noises from the Victorian setting.

There were two problems which rather spoilt this production for me. Firstly I don't like it when the Doctor is less intelligent than the listener. When someone starts stealing various items of scientific equipment it is fairly obvious to us what they are up to but it takes the Doctor ages to figure it out. The other problem was a repeated musical theme which really jarred with me as not fitting the time period. It sounded like it would have fitted a futuristic story fine but I didn't like it here, and every time it was used it threw me off.

As ever when I get excited by the title and cover art I can be disappointed and this was a little dull. A middling 2.5 out of 5 electromagnetic field generators. Let's press on to the Crimes of Thomas Brewster.
Posted by Eamonn Clarke at 2:46 PM No comments:

A recent Big Finish sale let me pick up a copy of another of their fine Sherlock Holmes range. The Tangled Skein by David Stuart Davies - Adapted by Richard Dinnick, directed by Nicholas Briggs & Ken Bentley. 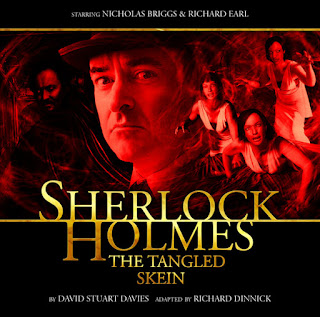 After listening to Holmes take on the Ripper this time the great detective is up against a famous fictional villain, none other than Dracula himself. After an attempt on Homes' life he and Watson are soon hot on the trail of the menace to Victorian society. They join forces with Professor Van Helsing as the realisation of what they are up against begins to take hold.

This story rattled along at a fine pace and although it didn't quite capture the heights of Hound of the Baskervilles or The Perfidious Mariner it at least put Holmes and Watson back into their original characters and allowed Briggs and Earl to deliver their usual fine performances. There is more detection and more bravery on display than in the Ripper tale and I felt much more at home with this story. My only complaint would be that it was all over and done with a bit too quickly for my liking (like this review).

Still it's another fine addition to what is currently my favourite Big Finish line and I eagerly await their third series of Holmes stories which should appear later this year. Baskervilles and the Mariner both got a full 5 stars, this is not quite as good but still gets a thrilling 4 out of 5 earth filled coffins. Gripping stuff.
Posted by Eamonn Clarke at 2:48 PM No comments:

Let me kickstart this blog back into action with a couple of quick reviews. Saturday May 4th was Free Comic Book Day. Which, as the name suggests, is an annual event where comic book publishers produce special issues to be given out in comic shops. The idea is to attract new readers and judging by the attendance at the events I visited in London they certainly seem to be getting young readers into the shops. 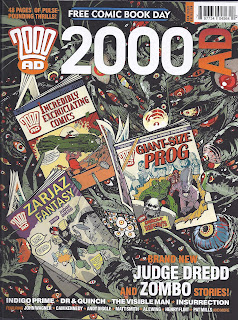 I travelled down to London mainly to attend the 2000AD signing organised at Forbidden Planet but first I popped into Orbital comics on Great Newport street which is currently my favourite comic shop. I say popped in but actually the queue to get into the shop was already stretching down the road when I arrived at 11am. Fortunately it was moving very quickly and once inside they were allowing 3 free comics to each person. I picked up the 2000AD prog first and then a copy of Mouse Guard for my cousin Ruairi who is a big fan. The staff were slightly surprised that I only wanted two comics but I wanted to leave as many other copies as possible for the large numbers of kids who were queuing patiently. There were several Cosplayers in costume wandering the store and keeping the crowds entertained and the whole event had a pleasant family-friendly atmosphere.

I would have liked to have done some back issue browsing but the shop was crowded and I wanted to get to Forbidden Planet in good time for the signing. 2000AD writers Al Ewing and Dan Abnett were going to be there, as well as artist Ben Willsher, but the big draw was legendary Judge Dredd artist Ron Smith who was making a rare appearance. At Forbidden Planet they were handing out free comic day goody bags as people walked into the store (sensibly there was a kid-friendly bag as well). I got one of the grown up bags which contained the IDW Judge Dredd classics comic which is reprinting colourised versions of old Dredd stories.

I was downstairs in the FP book department about an hour before the signing was due to start. After the queue to get into Orbital I was looking for a long line but there were only a few early birds like myself. Everyone was in a cheerful and chatty mood and the hour passed quickly as we talked about 2000AD artists we had met, pieces of original art that people had, and crucially what we had brought to be signed. I had two old 2000AD progs from the 1980s with classic Ron Smith covers and here is the artist himself signing them. 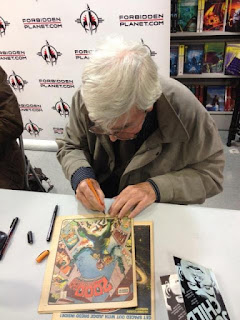 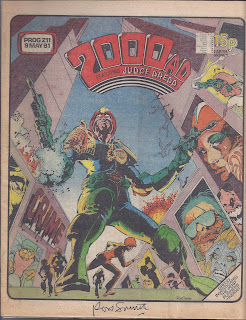 I also got the FCBD 2000AD prog signed by Ewing, Abnett and Willsher who were all in fine form and content to play second fiddle to the excitement generated by Smith's presence. Forbidden Planet had helpfully provided huge piles of both the Prog and the IDW issue. So I picked up an extra copy of each to sent to another member of the 2000AD forum who was unable to get there.

After that I popped back into Orbital where things had calmed down a bit and I was able to find some nice 1970s issues of Werewolf by Night. Then I visited Gosh Comics in Soho where I met my daughter. I bought a signed copy of the new Halo Jones trade for myself, and the lastest John Allison book for Jenny before we headed out for a late lunch.

What a tremendous day! I really felt like I had packed a lot into a very short time and getting those two comics signed by Ron Smith was just perfect. I shall certainly be back for more Free Comic Book Day fun next year. 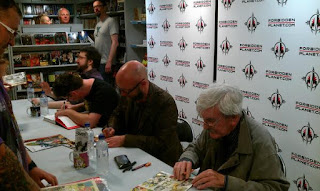 Posted by Eamonn Clarke at 2:30 PM No comments: