If anyone can, Carlos can

A pleasant trip to London last weekend to meet up with the 2000AD Southern contingent and peruse the fine offerings on display in Forbidden Planet before repairing to a nearby hostelry for a drink or seven. If you want details of these and other area meet ups check out the events page on the official 2000AD forums.

Forbidden planet had a Doctor Who comics signing so I took the opportunity to get writing droid Nick Abadzis to sign my ongoing Thrill Power Overload charity book. Later on in the afternoon Orbital comics were also holding a similar event with Paul Cornell signing his Four Doctors comics so I nipped across to get him to sign my book as well, and while there I spent a little money on some nice old Progs and then I saw this up with the other wall books for a mere four earth pounds. 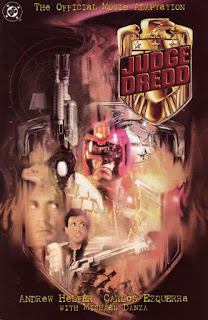 Art by Carlos Ezquerra with a cover by Bill Sienkiewicz, and all presented in a glossy prestige format comic. How could I resist? Before my review I have two confessions to get out of the way, first of all I quite enjoy the Stallone movie. Clearly it's not a Judge Dredd film, or not the one we wanted, but as a dumb Sylvester Stallone action film from the 1990s it's pretty good popcorn fare, and my mind can edit out most of Rob Schneider's performance and have an enjoyable time. Secondly, and perhaps more shockingly, I didn't get the appeal of Carlos Ezquerra's art when I first saw it in the late seventies and early eighties. It took a while to grow on me, it was the same with Jack Kirby's work which first left me cold and now I can see how brilliant he was. Of course I now worship at the altar of King Carlos and he leads my list of the top three original 2000AD artists, have I told that story about me buying him and John Wagner a pint in Kendall? OK, just checking.

However over in the US comics market I think most readers would share my initial impressions of Ezquerra's work. It can be an acquired taste and one that apparently a lot of American readers don't bother to get. So choosing Carlos for the official comic adaptation of the movie is an interesting choice but it worked for me. 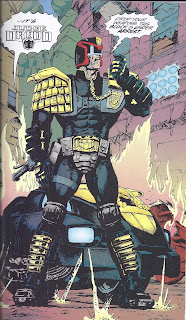 His usual storytelling and frenetic action sequences are all present although I did miss those signature jagged black lines around his panel borders or on Dredd's helmet. I'm guessing that they may not have had the rights to use the likenesses of any of the actors apart from Stallone, or maybe they just thought it wasn't worth the effort and seeing Fergy as a more typical Ezquerra lowlife goes some way to blotting out the memory of Schneider. And Carlos can now claim that not only did he co-create Dredd but he is also the first artist to actually show Joe's face in a comic. Although interestingly even when Dredd loses his helmet Carlos cannot resist the opportunity to show the top part of his face hidden by shadows whenever he can. Old habits die hard 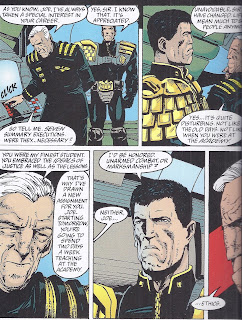 Andrew Helfer's adaptation is pretty straightforward and discards a lot of the catch phrases and attempts at humour from the film itself. The result is a frenetic action romp which would probably have produced a film more in keeping with the tone of the comics. yes there is off beat humour in Dredd but it's far more subtle than the caperings of Rob Schneider and a strained catch phrase. Michael Danza colours Ezquerra's art and gives it a look that is perhaps more typical of US monthly comics and in keeping with DC comics who published this one shot.

It is a bit of an oddity but with Ezquerra artwork and a Sienkiewicz cover you can't go far wrong. Definitely one for the completists and not likely to cost you to much money to acquire a copy.
Posted by Eamonn Clarke at 12:46 PM No comments: