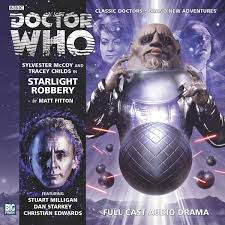 Here is the second part in the current Seventh Doctor trilogy. Elizabeth Klein and Will Arrowsmith are sent undercover to an illicit, galactic arms fair run by the Urodelian crook, Garundel who we last heard in Black and White. The Doctor has set his two companions on the trail of the Persuasion machine and its creator Kurt Schalk.

Sylvester McCoy is a busy chap and this seems like one of the Doctor-lite episodes from new Who. So Klein and Arrowsmith do most of the leg work here and they are ably assisted by a host of bad guys attending the arms auction. In particular Dan Starkey who plays Strax on TV gives us three different Sontarans. His performance is one of the high points of this audio drama. It's nice to hear the Sontarans as a credible military power instead of just figures of fun. I am less keen on Garundel as a character but his role as a galactic con man works in this story so I'll give him a pass.

As ever it is Tracey Childs as Klein who really shines as the best thing in the whole episode. I've mused before about why her character works so well with the Seventh Doctor. We shouldn't like her but we do. The few moments she gets with the Doctor are great stuff. She can see through the master manipulator and recognises when she is being used as a tool, "just another sonic screwdriver" as she memorably puts it.

The story didn't grab me particularly, but the Sontarans and Klein were worth the price of admission alone. 4 out of Sontaran spheres for Starlight Robbery.
Posted by Eamonn Clarke at 1:35 PM No comments:

A quick look at the Judge Dredd story in the very latest Prog. This is from Bender part four by John Wagner, Ben Willsher and Chris Blythe. Warning spoilers ahead!

Judges Lock and Bender make an explosive entrance into a hidden laboratory where two men are "cooking" the drug Zziz. One of the criminal chemists douses Lock with the highly flammable base ingredient which then catches fire when the Judge fires his Lawgiver. His partner Bender acts quickly to disable their assailants and throws a fire blanket over Lock to put out the flames. However from the following image it would appear that his injuries are severe.

Judges' uniforms are flame resistant and he hopefully got a lot of protection from his helmet. At the end of the previous issue Bender advised Lock to put his helmet respirator down before entering the lab. It is missing from the front crest on his helmet so he must have been wearing in when he was engulfed in flames. This should have protected his lungs from the flames, fumes and risks of smoke inhalation. However it would seem that Lock has third degree burns on his lower face and neck, the fire has removed the full thickness of skin and exposed the subcutaneous tissues. This is a serious injury that would require extensive inpatient treatment to heal and a lot of plastic surgery to repair the damage to the face.

Fortunately this is something that the Mega-City One medics are very good at. We know that Judge Dredd himself had similar facial burns repaired after the events of Necropolis. What bothers me slightly is how quickly Lock returns to street duty after this terrible injury. By the end of this episode he is back on his bike and confronting Bender about his actions. The story demands a fairly quick return to duty but I'm not sure that the medics would be able to get him fit again so easily. The other problem is that we know Lock is already suffering from a degree of post traumatic stress disorder after the events of the Day of Chaos. Having treated police officers and firemen who have been injured in the line of duty I know how difficult it can be for them to recover fully. After sustaining such horrific burns I would have thought Lock would need a further period of counselling before he was passed fit to return to work. However as the 2000AD forums have pointed out, John Wagner might have story plans for a Judge with deep psychological issues and a scarred face. He does resemble one of Dredd's greatest foes who is due to return to the comic next year. 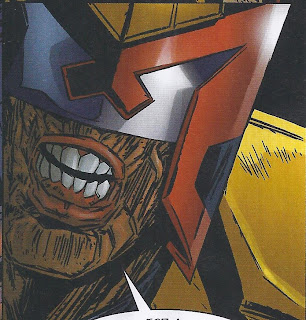 One final note. I confess I don't know much about he properties of the fictional Mega-City drug Zziz. It would seem that Wagner has been watching Breaking Bad, and used the preparation of Meth-amphetamine as inspiration for the activity of the illicit chemists. Making the drug is clearly a risky business and judging from the following panels Lock was very fortunate that he had his helmet and respirator to protect his eyes and mouth from the drug base. 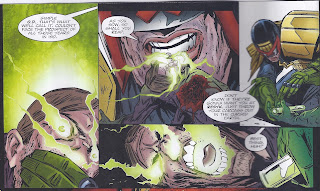 Posted by Eamonn Clarke at 9:33 AM No comments: