At Big Finish day I picked up the first box set of Jago & Litefoot, partly because it was cheap and so I would have something for Christopher Benjamin, Trevor Baxter and Lisa Bowerman to sign. I wasn't sure when I would get around to listening to it but after enjoying the recent Justice of Jalxar so much I pushed it to the top of my list. 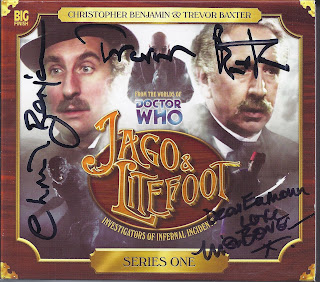 There are four single disc stories with a connected developing story arc through the season that links back to the characters' first Big Finish appearance in a companion chronicles story called The Mahogany Murderers. First up is The Bloodless Soldier by Justin Richards, directed by Lisa Bowerman, which has our two reluctant heroes investigating what appears to be a case of Lycanthropy. It's fairly classically done but is all very enjoyable and allows Henry Gordon Jago to discover some undiscovered depths of character.

Next is The Bellova Devil by Alan Barnes, again directed by Lisa Bowerman with Jago & Litefoot on the trail of the walking dead, or a man who appears to have died twice. I confess I am still struggling with Alan Barnes' stories for Big Finish and this was probable the least enjoyable of the four tales but it does provide hints as to the true villain of the first season.

The Spirit Trap by Jonathan Morris is directed by John Ainsworth. What seems to be a straight forward investigation of a bogus spiritualist medium leads our heroes in to a much more sinister world where, in classic Whovian fashion, the paranormal is explained with some science fiction bad guys.

And finally the bad guy returns to haunt Jago and Litefoot in The Similarity Engine by Andy Lane, with Lisa Bowerman returning to directing duties. Possibly because it is the last and brings the developing plot threads together this was my favourite of the four. It also helps to have the multi-voiced talents of Toby Longworth on board.

To attempt the alliterative talents of Mr Henry Gordon Jago this set is fairly full of fantastic, phantasmagoria! The shorter stories really work well and Baxter and Benjamin are just a delight to listen to. I'm still committed to the main range of Doctor Who releases but Jago & Litefoot could possibly tempt me away. Some of the best stuff I have listened to recently. 4.5 out of 5 silver shillings for this set. And there's another four box sets in the series so far. Corks!
Posted by Eamonn Clarke at 3:35 PM No comments:

Big Finish - The Dalek Contract and

Two Big Finish stories from the Fourth Doctor Adventures range, The Dalek Contract and The Final Phase. Both written and directed by Nicholas Briggs. 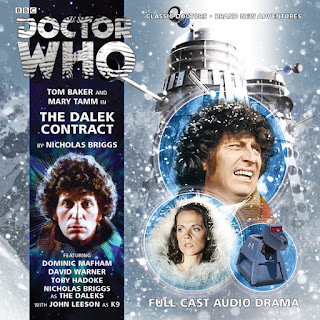 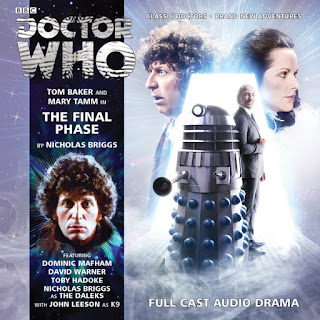 This is really a two part story for the Fourth Doctor and Romana as they deal with the consequences of a deal that the capitalist megalomaniac Cuthbert has made with the Daleks. And when have the Daleks ever kept their word?

There is something very nostalgic about the Big Finish Fourth Doctor adventures. They have deliberately set out to recreate the feel of the late 1970s in these stories and it is all rather charming. Alistair Lock's music seems to catch this mood perfectly and really stood out as a great example of what Big Finish do so well. Obviously Tom Baker is on cracking form and John Leeson is in there as K-9 as well. David Warner brings a robust Northern accent to the part of Cuthbert and is a delight, as is long time Doctor Who fan Toby Hadoke. But these stories really belong to the late Mary Tamm who plays Romana for the last time ever. She is so good and it is almost painfully sad to listen to them knowing that she was not very well at the time, and that this is her last work on Doctor Who.

I bought these stories because Nicholas Briggs recorded some crowd noise during a live podcast at Big Finish day 3 and my voice is in there somewhere in the background. The Dalek Contract part two, track five in case you're interested. But these are two terrific Dalek stories tinged with the melancholy that has affected the Who universe recently as we have lost so many of the companions from the classic series.

Four out of five mechanical Mutts and farewell to Romana One.
Posted by Eamonn Clarke at 10:12 AM No comments:

Next up in the Big Finish's 2000AD line is War Crimes by David Bishop, directed by John Ainsworth. 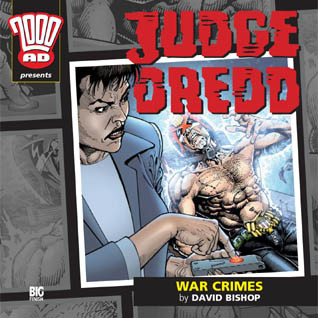 Dredd is a prisoner and facing some pretty gruesome interrogation techniques with electric wires connected straight into his nervous system. At first the identity of his questioner is concealed but it soon becomes clear that he is been held to task for his actions in The Apocalypse War when he pushed the button that wiped out East Meg One. However there are some twists and turns along the way, if Dredd can survive the torture long enough.

Interestingly there are some parallels between this story and current events in the comic book where Dredd is being held responsible for the latest disaster to strike Mega-City One, the Day of Chaos. In both cases blaming Dredd makes little sense, and certainly if the Council of Five has followed his advice early on then Chaos Day at least could have been avoided.

So this audio drama is basically a two hander between Toby Longworth and Caroline Burns Cooke as the interrogator, Isaacs, and they do a pretty good job of keeping the tension up and driving the story on. As we would expect Dredd is fairly tough in the torturer's chair. And once the twists start to be revealed it all moves along to a pretty nifty conclusion.

Having a Big Finish story that ties into so many of 2000AD's epic adventures is great fun and the two actors completely sold me on their characters. A very decent 4 out of 5 missile launch buttons. Next in the 2000AD line will be For King and Country.
Posted by Eamonn Clarke at 2:51 PM No comments:

Big Finish - The Justice of Jalxar

From the Fourth Doctor series here is The Justice of Jalxar by John Dorney, directed by Ken Bentley. 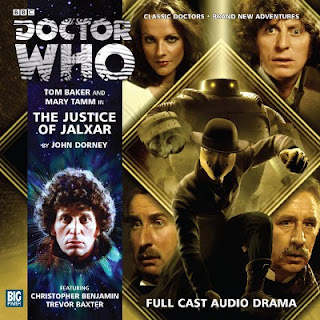 The Doctor and Romana arrive in Victorian London on the trail of a crashed alien spaceship but they need some local knowledge. And who better to turn to than the Doctor's acquaintances from a previous adventure, Professor Litefoot and Henry Gordon Jago. There are a number of strange murders to solve, and there is the mysterious figure of The Pugilist, who appears out of nowhere to fight his one man war on crime and wrong-doers.

Corks! This was simply splendid. With witty nods to superhero stories, the steampunk genre, a Victorian version of the X-Files and even a Taxi Driver joke, John Dorney has delivered a fantastic script which showcases Big Finish at its finest. The performances are top notch with the remarkable Christopher Benjamin stealing the show as Jago, although Tom Baker, Trevor Baxter and the late Mary Tamm give him a run for his money. The sound design, the music and special effects and even the cover art are fantastic, and this two part story really cracks along,

I may have a problem here. I'm trying to stick to the main range Doctor Who releases, but there's also the upcoming Sherlock Holmes stories, and now there's the Fourth Doctor series and the temptation of all the Jago & Litefoot material which I haven't even touched on. Balancing this budget could get tricky.

Anyway, leaving those purchasing dilemmas aside this was fantastic and I thoroughly enjoyed it. 5 out of 5 steam powered robots. Only the eighth Big Finish story to get that top score from me. Corks!
Posted by Eamonn Clarke at 4:00 PM No comments: