Big Finish - Daleks Among Us

The second Big Finish audio on the playlist for my long bike ride was Daleks Among Us by Alan Barnes and directed by Ken Bentley. 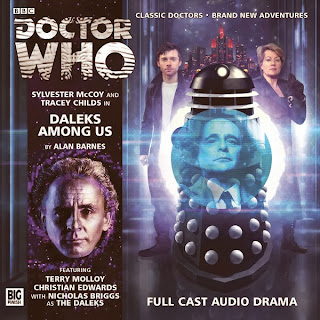 The conclusion to the latest Klein trilogy sees the Seventh Doctor, Will Arrowsmith and Dr Klein herself arrive on the planet Azimuth in search of that elusive Persuasion machine. As ever things are not what they seem and while Elizabeth learns the shocking truth about her past the Doctor encounters and old enemy.

Well this is just fabulous. Everyone here is on top form and I was very impressed to learn that Alan Barnes was the author. I have had problems with some of his previous scripts but it seems that Daleks bring out the best in him. And these Daleks are fairly nasty and violent and not just the giant screeching toys that they can sometimes appear as in Doctor Who. In fact there is a real sense of menace in this story with none of the humour to be found in Starlight Robbery.

I like this idea of the Seventh Doctor sensing his time is limited and trying to wrap up loose ends, all the while keeping an eye on Elizabeth Klein in case she somehow reverts to type. There is some more of that Elder Gods stuff which bores me but that is more than made up for with a clash of wills with a dark enemy. I didn't look at any cast lists in advance so I didn't know what was coming and Big Finish pulled off a big surprise. I won't spoil it here but it was as much fun as when they managed a similar trick in Unit: Dominion.

While all this is going on Dr Klein "borrows" the Tardis to travel back to 1945 Germany and discover some of the shocking truth about her origins that the Doctor has been keeping from her. Once again Tracey Childs does a marvellous job. I did like the way her German accent deepened when she was in her home country. I don't know if it would sound convincing to German listeners but it impressed me.

All in all a terrific story and my favourite of the trilogy. 4.5 out of 5 Persuasion machines. One of the best Big Finish stories around.
Posted by Eamonn Clarke at 5:11 PM No comments:

Some quick reviews to catch up with my Big Finish listening. Pre-Emptive Revenge by Jonathan Clements, directed by John Ainsworth. 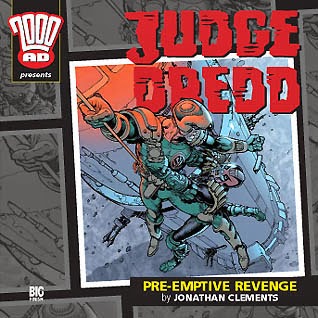 A Judge Dredd and Strontium Dog team-up! This takes place after the story Judgement Day which ran in 2000AD and the Megazine back in 1992. Dredd and Johnny Alpha are a long way (or time in Alpha's case) from home but before they can be picked up they have to deal with a missile defence system which threatens to destroy Hondo City.

This is a welcome return for Simon Pegg as Johnny Alpha. Once again he is acting opposite Toby Longworth but here playing Dredd instead of playing Alpha's bounty hunting partner Wulf Sternhammer. And this is a much more combative relationship. Dredd and Alpha do not get on and although they are forced to work together they do not get on at all. In fact this story largely consists of the two characters arguing. It is virtually a two hander with just one other actor in a minor role. And it all passes by fairly quickly without leaving much of an impact. It's a shame really to have two great voice actors and just have them shouting at each other for 50 minutes. Obviously the writer couldn't do much with the established continuity of Judgement Day and the comic storyline but the result is the feels rather inconsequential.

Still Pegg and Longworth are fun to listen to and it made the time fly by on a long bike ride I was doing recently. 3 out of 5 electronux defibrillators. Onwards!
Posted by Eamonn Clarke at 4:51 PM No comments: