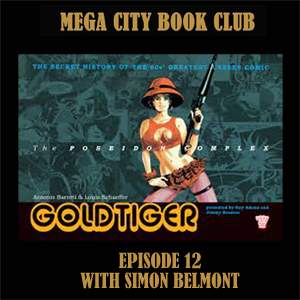 Simon Belmont returns to the book club to tell me the history of the Modesty Blaise newspaper strips. Then we don sexy, sixties scuba gear to dive through the many layers of Jimmy Broxton and Guy Adams' quirky metatextual homage to sixties Spy-Fi comics, with the mysteries of the strip that never was, GoldTiger.

GoldTiger is available to buy digitally from the 2000AD online store, or you may still snap up hard copies from passing scuba-diving amazons. 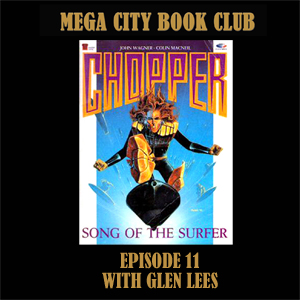 I welcome Glen Lees all the way from the wonderful land of Oz to discuss a classic chapter from the legend of Chopper. Surf's up and there are plenty of spoilers for the controversial ending right from the outset.

You can find this story in the Chopper: Surf's Up! collection from the 2000AD online store, or digitally from their apps for Apple, Android, and Windows devices. 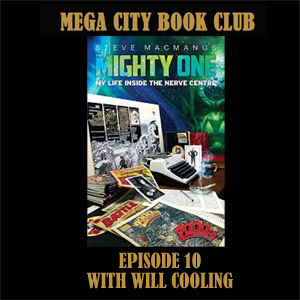 A special episode to tie in with the release of Steve MacManus' fascinating memoir of his time at the helm of the Galaxy's greatest comic. I'm joined by Will Cooling to discuss the mysteries of creating comics in the seventies and eighties. You can find Will's retrospective article about 2000AD in the latest issue of Geeky Monkey magazine, and check out his own interview with Steve on the Geeky Monkey podcast.

The Mighty One is available from the 2000AD online store, and you can also hear Mr MacManus on the Thrill-Cast with Mike Molcher. 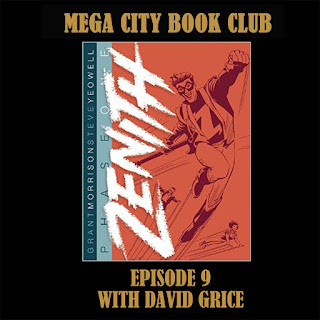 David Grice is my guest to discuss the first appearance of 2000AD's take on the British Super-hero. There are number one singles, 80s shoulder pads, splendid black and white artwork, and some spoilers to come.


Zenith Phase 1 is available from the 2000AD online store, or digitally through their Apple, Android, and Windows devices.


All comments and suggestions gratefully received. 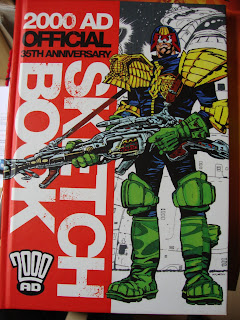 Here is my copy of the official 2000AD sketchbook with better quality paper. So far it has twelve sketches, usually paid for and therefore more detailed than the notebook Dredd head doodles. At the moment I plan to auction this for charity once it is finished but there are another ten pages and I only get one or two sketches at each convention so it will be a while yet.

You can see the sketches so far in this photobucket album. And just to whet your appetite here is a marvellously creepy Judge Death by Dave Kendall. 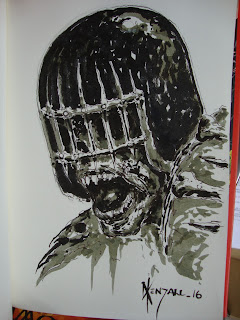 Posted by Eamonn Clarke at 12:43 PM No comments:

Email ThisBlogThis!Share to TwitterShare to FacebookShare to Pinterest
Labels: 2000AD

I've had a couple of questions about the 2000AD notebook project I'm currently doing for charity so here's what we've got so far. 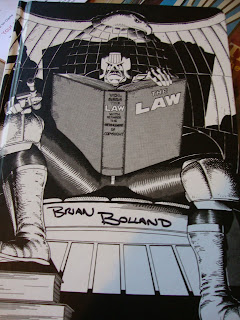 The notebook and pen were this year's 2000AD subscribers' free gifts. The paper is a bit thin to use it as a sketchbook so I thought I would collect as many 2000AD Droids' signatures as I could and maybe ask them to do a quick Dredd head doodle if they had time. As you will see some of them did far more than a doodle, I told writers that they could just do a speech bubble although some of them bravely attempted a head sketch. You will also see that my clever idea of getting John Wagner to do a speech bubble coming out of the Mick McMahon sketch unfortunately buggered up the David Roach page because John used a sharpie instead of a pencil. My bad.

So far 40 creators have signed the book including Brian Bolland on his cover image. All of the creators did their sketches for free when I told them it was a charity project and I'm enormously grateful for their generosity.

You can find the a Photobucket of all the sketches and signatures so far by clicking here. The notebook will be travelling to another 2000AD signing next month and to Thought Bubble in November as well. After that it will go up on eBay as a 100% for Cancer Research UK charity auction with free P&P from me. Watch the 2000AD forums classified page for details or follow @MCBCpodcast on Twitter.

Here's the list of the signatures so far, the pictures in the photobucket are in reverse order: 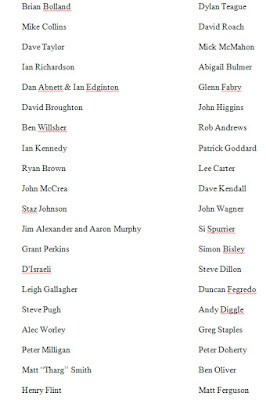 I also have a more formal 2000AD sketchbook project which I'll post details of later. That has another 10 pages to fill so will probably be up for auction next year.

Posted by Eamonn Clarke at 10:32 AM No comments: