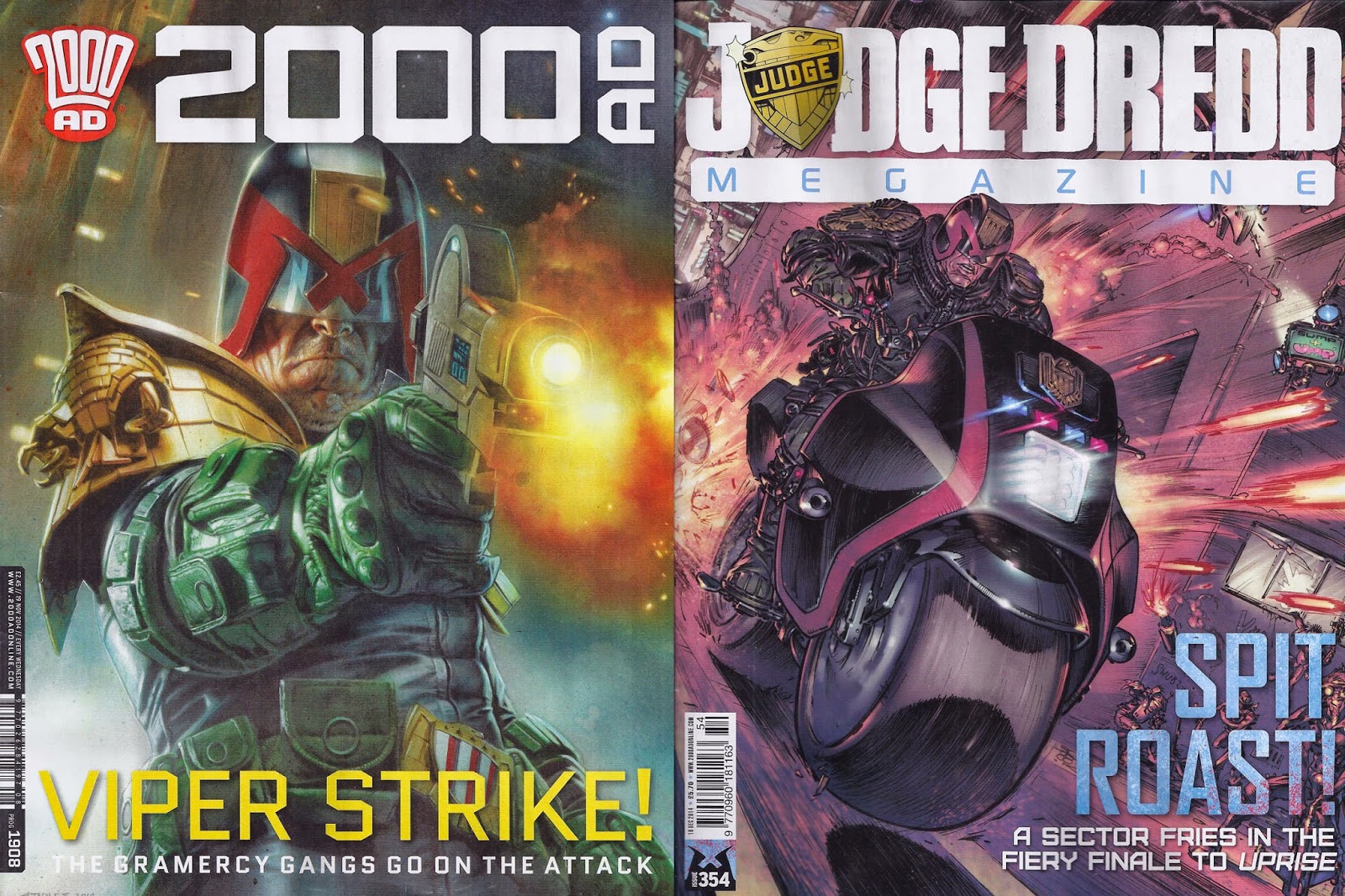 Covers: Boo Cook versus Greg Staples
Wow. This is a tough choice. Cook gives us a magnificent image full of movement and action and a lovely interpretation of the 2012 uniform, but look at that Greg Staples image. It's a stunner. I could quite easily choose a top five Prog covers of the year with just Dredd images alone. This one gets the win for the Prog.
Result 1-0 to the Prog

Block Judge by Wagner, Carlos Ezquerra and Annie Parkhouse versus Dead Zone by John Wagner, Henry Flint and Annie Parkhouse.
In the Prog John and Carlos continue to ramp up the action in the ongoing Block Judge story which features the slowly evolving police procedural investigation that Wagner is so fond of at the moment, and so good at. It's lovely to look at, the action is great, and the ongoing development of Beeny and Corrigan is fascinating. Top stuff all round.

The Megazine story takes a strange turn with the activation of a sleeper time agent from the future, which is what I think is happening. As Dredd closes in on his target this other rogue element threatens to derail the subject at the same time as explaining the magic bracelet. Henry Flint continues to produce the only Dredd artwork that can rival King Carlos. I was lucky enough to see him working at Thought Bubble and the range of improvised techniques he uses to produce his inked sketches was just fascinating to behold. This is the cracking Judge Death he did for me, and it was free! 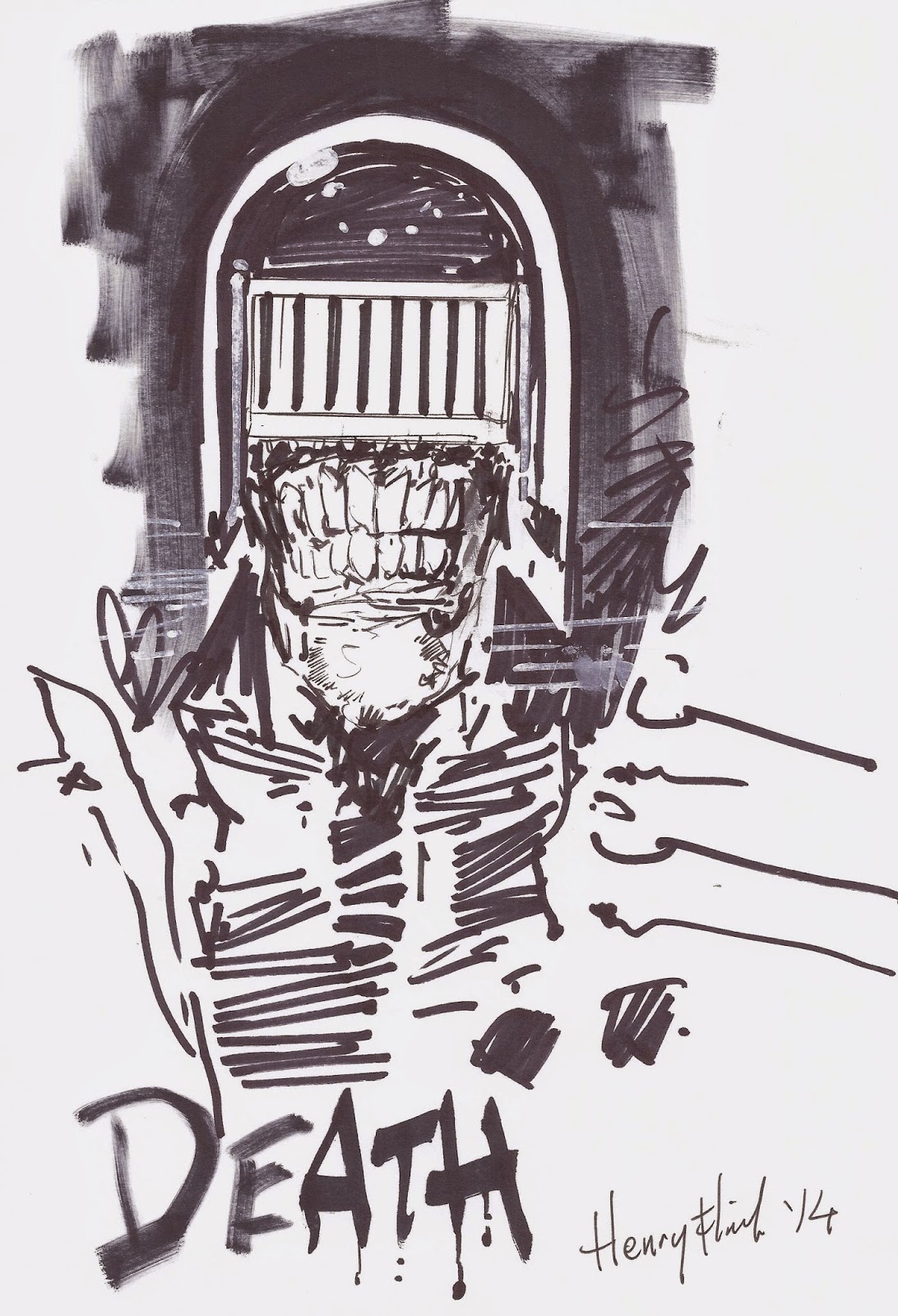 Result: Impossible to divide the two creative teams but the future cop thread in the Meg has thrown me slightly so it's a narrow win for the Prog
2-0 to the Prog

Stickleback by Ian Edgington, D'Israeli and Ellie de Ville versus Lawless by Dan Abnett, Phil Winslade and Ellie de Ville.
The two black and white stories go head to head. In Stickleback the stakes are raised as the three furies (or whoever they are) take out the dragon leaving D'Israeli's artwork to rule the airways. There are some charming background details like George Formby playing his ukulele outside Mr Wu's laundry and an appearance of the fish paste in-joke for regular readers of the Edgington and D'Israeli universe.

In Lawless Abnett and Winslade continue to build an impressive Deadwood like world as Marshal Lawson treads a fine line between the different cultures in the community. Her hair still looks ridiculous but the amount of detail in the background is staggering. The suggestion that Lawson may not be able to use her Lawgiver is intriguing and I wonder if this is going to come back in later episodes.

Greysuit by Pat Mills, John Higgins, Sally Hurst and Ellie de Ville versus Tales from Megacity One: Wendell Says by T.C.Eglington, Darren Douglas and Simon Bowland.
I confess that the current Grey Suit story is not catching my attention in the same way that the first trade paperback collection did. I'm all for Pat Mills' attacks on the establishment but I'm skipping much of this, and I don't like John Higgins' colour palate plus I'm getting bored by the punching someone's jaw off.

The Tales from the Megacity story is a also a puzzler which I've read twice and it's still not made much of an impression on me.
Two stories that missed me this month, another tie.
Result 4-1 to the Prog

Uprise by Arthur Wyatt, Paul Davidson, Chris Blythe and Simon Bowland versus Ichabod Azrael by Rob Williams, Michael Dowling and Annie Parkhouse
Ichabod Azrael is an immense story spread across a battlefield in hell, or purgatory, or somewhere. The artwork is stark and striking and it's had a couple of great covers, but I confess I am lost and will have to promise one of my usually unfilled rereads from the start.

The Uprise tale comes to a satisfying conclusion and although some of it is wrapped up a bit quickly it does show Dredd and his rookie working effectively and doing the smart things. These are well trained and well organised law enforcers so it's nice to see them acting that way. Much better than the Underbelly story. Well done to all. And it's a win for the Megazine.
Result 4-2 to the prog

Kingdom by Dan Abnett, Richard Elson, Abigail Ryder and Simon Bowland versus the Megazine bonus material
I am beginning to have my doubts about Kingdom when every instalment ends with Gene exhorting his pack to "Get whet!". However it is beautifully illustrated and wins over the Meg interviews, a text story, and the free floppy which I haven't read and don't really plan to unless someone tells me it's a cream cracker.

Final result 5-2 to the Prog.
A runaway victory for 2000AD which just reflects how good it has all been since prog 1900 and we've got Dark Justice on the horizon. Mr Tharg is spoiling us at the moment and long may it continue.

Posted by Eamonn Clarke at 10:42 AM No comments: 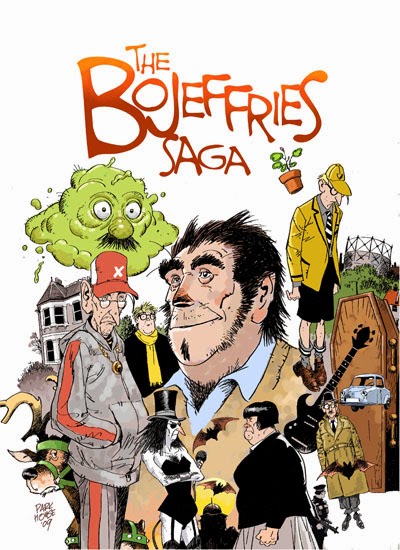 Reams have been written about Alan Moore's two main stories for Dez Skinn's 1980s Warrior magazine. But while Marvelman and V for Vendetta were tearing up the rule books and redefining British comic books he also created a third, often overlooked strip for Warrior. The Bojeffries Saga first appeared in issue 12 and was illustrated perfectly by Steve Parkhouse. The set-up was deceptively simple as a boring, bureaucratic rent man attempts to collect long overdue back payments from the family who live in a nondescript British terraced house.

The Bojeffries are a bunch of madcap individuals including a werewolf, a vegetarian vampire and a daughter who may be the most powerful being in the universe. It was as if the Adams family had come to England and moved into a house on Benefits street. Only four episodes were printed before Warrior folded but over the years Moore and Parkhouse have published extra stand alone tales in a variety of other books. Earlier this year all of these stories were published in one reasonably priced volume giving us a chance to catch up with this weird oddity.

The early episodes set in Moore's home town of Northampton are the best and the most bizarre. The Bojeffries family appear to inhabit a version of a much earlier Britain with council houses, rent collectors, works' Christmas parties, and the remnants of light manufacturing industries it seems that Moore is recreating the life he grew up in during the fifties and sixties. The later add on tales bring the family into the 21st century and the world of reality TV and ASBOs. I have to say although Parkhouse's art is still marvellous these episodes seem more forced and have less of the weird wonder of the originals.

Still this is a great opportunity to discover these strange tales from two 2000AD droids, especially if you get the Kindle version which is currently cheaper than a cup of coffee.
Posted by Eamonn Clarke at 12:55 PM No comments:

I visited that London again to get Ben Willsher to sign my ongoing Art of Dredd charity project book and popped into Orbital comics to check out their Pre-Code Horror gallery exhibit and to buy a couple of ancient Progs from their £2 box. Here is 218 from May 1981 with a Brian Bolland cover that is linked to a simple half page text story buried in the middle of the comic. It's not one of the iconic Bolland images but it does have a nice Flash Gordon feel to it. 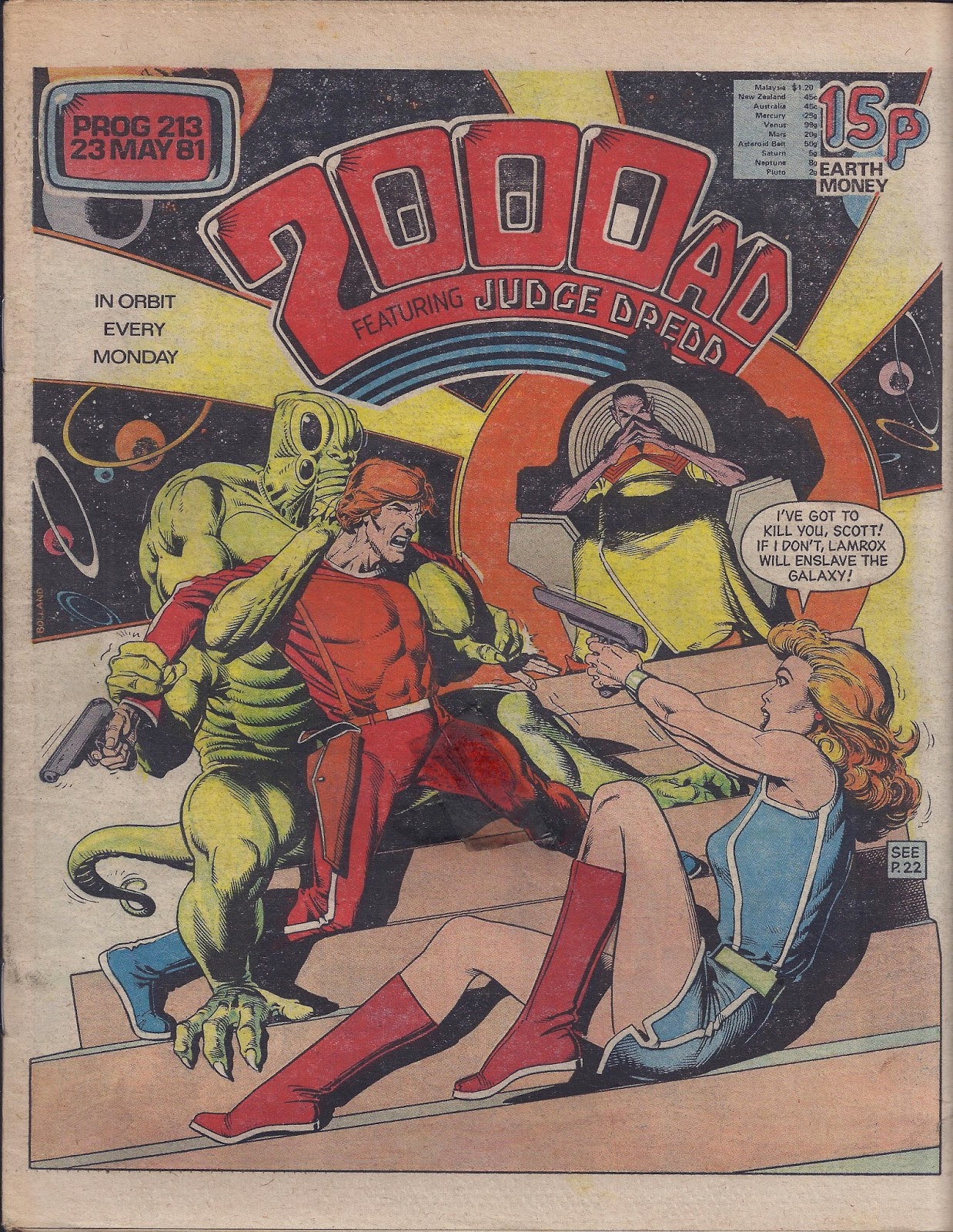 The first strip is Strontium Dog: Portrait of a Mutant part 11 by Alan Grant, Carlos Ezquerra and Steve Potter, and it's lovely to see those jagged black edges on the panel borders that have made a major reappearance in the current Judge Dredd story. It's an all action episode as young Johnny finally comes up against the oppressor of mutant-kind, Nelson Kreelman.

After a full page ad for some amazing train-spotting binoculars there's a Steve Moore Future Shock with art by Mike White and letters by Pete Knight. The twist can be seen a mile off but it's all done with the usual black and white verve and ends with a bit of fun.

The Nerve Centre has some high praise for Meltdown Man as well as details of the Buck Rogers stickers given away with this issue. That explains why every cover image I can find had sellotape on it, mine own included. There is also a half page ad for the battle holiday special which was probably worth picking up for Charley's War alone.

Ron Smith gets the colour double page centre spread on Judge Dredd who is after Umpty dealers in a story written by John Wagner and Alan Grant, with lettering by Tom Frame. Classic Ron Smith mayhem ensues with one particularly lovely image of Dredd and a host of fellow Judges all on their Lawmasters.

The half page text story that explains the cover follows, along with a listing of the comic and science fiction convention going on in 1981. Now if only I had gone along and bought some original artwork back then.

Return to Armageddon is next by Malcolm Shaw, Jesus Redondo and Bill Nutttall and I've blogged about this elsewhere. And then it's the weirdness of Meltdown Man as Nick Stone uses some unorthodox techniques to board a train to Snow City which he has to reach for some plot point or other. Written by Alan Hebden, art by Belardinelli and letters by Tony Jacobs, it's more whacky and wonderful stuff from those heady days of the Prog.

On the back cover we get more Brian Bolland art although I suspect they are two images lifted from the first Judge Death story and then neatly coloured for this pin up version. The pick of the Prog has to be Judge Dredd with that wonderful Ron Smith art, and there is a Whittle circular panel count of two.

Posted by Eamonn Clarke at 12:25 PM No comments:

What on earth am I doing with a drawing tablet and a program called Manga Studio 5? For some mad reason which seemed like a good idea at the time I have been tinkering on and off for a few months with a 2000AD parody of the famous George Pérez cover to issue 7 of Crisis on Infinite Earths. Here is the original: 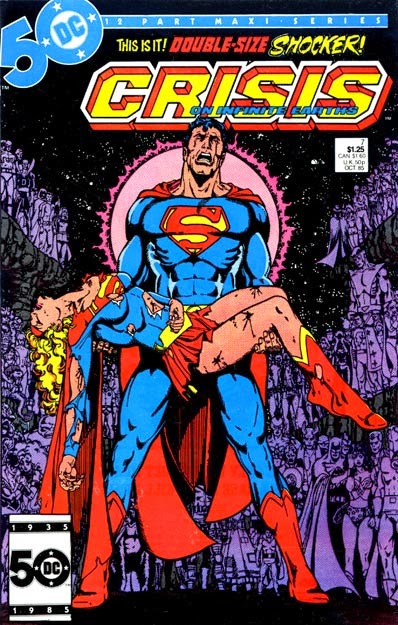 And here, after a lot of cursing, rubbing out and terrible penmanship, is my 2000AD version. Click to embiggen etc. 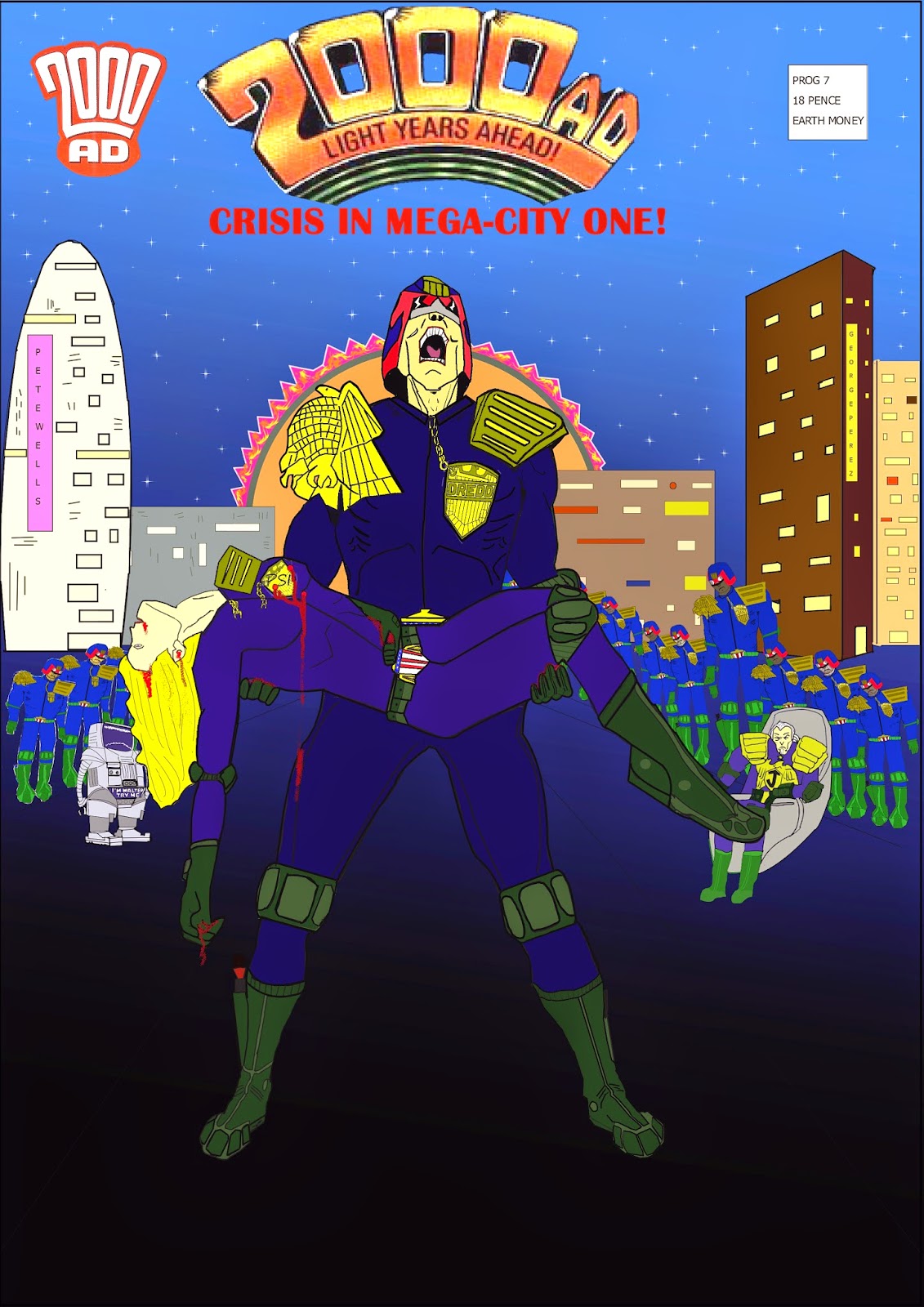 I've learnt a lot about the Manga Studio programme along the way, and a very healthy respect for what real comic book artists can do. It's pretty clear that if I was to try another project I would set about it in a much different way. There was a fair deal of tracing involved and the background Judges are all a bit rubbish and obviously just clone stamped. Despite all it's faults (which are many) I have entered it in this month's art competition on the 2000AD forums so watch this space to see if my crappy artwork can do better than my short stories.
Posted by Eamonn Clarke at 12:24 PM No comments: