2000AD prog 2012 is the big Christmas 100 page special, rather like the old annuals that British comics used to put out. It's an excellent jumping on point for 2000AD as several new stories start in this issue so there isn't a lot of previous continuity to catch up on. 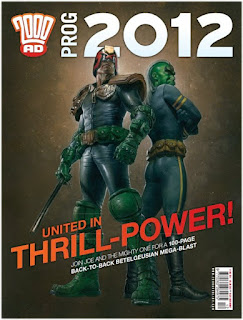 The Judge Dredd story in this issue is a stand alone that parodies choose your own adventure books. It's ok but after the building tension of the recent Day of Chaos and Assassination List storyline it seems a bit lightweight.

More interesting is the first part of a new Absalom story, "Sick Leave" by Gordon Rennie, with art by Tiernen Trevallion and letters by Simon Bowland. Harry Absalom is a police inspector who heads up a paranormal investigation team that spun out of another 2000AD strip called Caballistics, Inc. He is a cranky and hard drinking old-school police officer who is also suffering from advanced cancer. While his team are investigating some strange graffiti in an East London estate, Absalom is at the hospital for a consultation with his oncologist. He is shown into a clinic room where he encounters a demonic ghost version of himself. 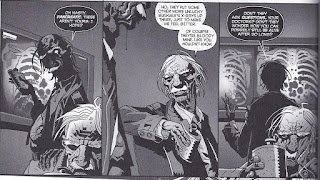 The above panels reveal that Absalom has cancer of the Pancreas which has a notoriously poor prognosis. Sadly, you can't diagnose Pancreatic cancer from x-rays as the demon does here. It needs a CT or MRI scan to detect the tumour in the Pancreas gland which lies behind the stomach and underneath the diaphragm, which separates the chest from the abdominal cavity. The demon seems to be looking at chest x-rays with lots of dark, round shadows on them. Presumably these represent metastases or spread from the original cancer. Technically the shadows should be in in the peripheries of the lung fields and not, as they are shown in these panels, overlying the central structures of the heart, mediastinum and sternum. You can see an image of a real chest x-ray with metastases here.  Spread to the lung can occur in many different types of cancer, and are not typical of pancreatic cancer. Unfortunately you can't tell what type of cancer causes lung shadows like this just by looking at them. Still, let us assume that demon, ghost thingys have diagnostic powers beyond those of us mortal doctors.

The other very interesting thing about the Absalom strip is its references and nods to other classic works of occult fiction. The next page in this issue includes these panels. 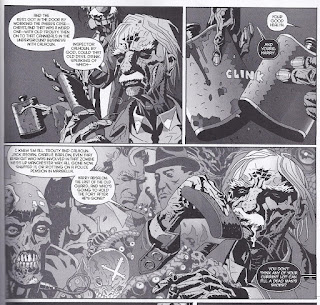 Harry Absalom refers to Inspector Trout from the Abominable Dr. Phibes movies, starring Vincent Price. Inspector Calhoun was played by Donald Pleasence in the 1972 film Death Line, in which he investigated Cannibals in the underground.

Jack Regan was, of course, played by the late John Thaw in The Sweeney. Inspector Barlow was a character in the British TV shows Z Cars, Softly, Softly, Barlow at Large, and Second Verdict, and was played by Stratford Johns. Regan and Barlow didn't investigate the paranormal although Barlow, with his colleague John Watt, did look in to the Jack the Ripper case once.

Finally, the "Irish git who was involved in that Zombie mess up in Manchester" is a reference to the film The Living Dead at the Manchester Morgue, and to the police sergeant played by Arthur Kennedy.

The images in the third panel show from the left, Dr Phibes, Inspector Barlow, Jack Regan and, I think, Inspector Trout. Hopefully, somebody will let me know where the demon with the inverted cross on its head comes from.

The artist and writer got a bit confused about Pancreatic cancer, metastases and chest x-rays, but they more than made up for it with the cult references. For medical accuracy this story gets a solid 3 out of 5 outpatient clinic appointments. However this is a great first episode and I've now got something to look forward to in 2000AD other than Judge Dredd. If you are interested you can read the first episode of the original Absalom story from prog 1732 here.

Big Finish - The Witch from the Well

This is Big Finish release 154 - The Witch from the Well. The eighth Doctor and Mary Shelley get caught up in a seventeenth century witch hunt which gets more complicated when the fast return switch on the Tardis separates them by 400 years.

This story didn't quite hit the heights of The Silver Turk but it is very good. There's a nice creepy element to the mystery of the titular witch. Personally I could have done with that mystery carrying on for a bit longer before the science fiction solution is revealed, but that is just my preference for spooky ghost stories.

There is only one problem with these eighth Doctor stories and it's the music. I assumed that Big Finish were using the appropriate theme music for each doctor and that this was the music from the TV movie. But as Paul from the TimeVault podcast pointed out on my previous post this is actually a remix.

When Channel 4 did their countdown of the 100 scariest moments they included the original Doctor Who theme music as an entry in its own right. The rock journalist Alexis Petridis described it then as a perfect piece of music, and I agree. That's not to say that I don't like the updated versions for the subsequent Doctors, I actually enjoy all of them apart from the movie version. If you want to listen to an interesting run through of all the theme tunes up to the tenth Doctor then check out Tom Dillahunt's Podcast Who and, in particular, his episodes 40, 41 and 42.

Anyway, this soft rock of version of the theme tune is the worst version out there, it really spoils the cliffhanger endings to the four episodes in this story. But let's look past that and give this Big Finish story 3.5 out of 5 Radiophonic workshops. Next up I'm jumping back in the Big Finish timeline and will be listening to Neverland.

Posted by Eamonn Clarke at 8:07 PM No comments: