Two Hearts beat as One

Doctor's log supplemental:
Over on the British Invaders Facebook page I asked for any other examples of Doctor Who having an x-ray. Brad Walker and Tony Bellows pointed out there is a scene in episode two of the Caves of Androzani which shows a scan of the Fifth Doctor's hearts. Towards the end of the episode the Doctor and Peri are trying to escape from a cell which is guarded by a vigilant Android with a big gun. The Doctor gambles (correctly as it turns out) that the Android's scanner will be confused by his abnormal anatomy and won't shoot him. As he steps out of the cell the camera switches to give us the Android's point of view and we see this. 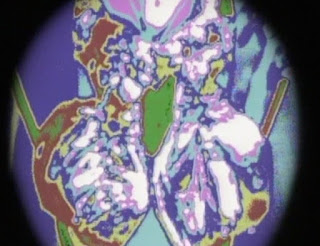 Which looks like something called a false colour Echocardiogram where colours are added to a normal ultrasound scan of the heart to represent the different directions of blood flow. We can see two purple and white heart shaped structures. They are in the right place, and they are the correct size and shape. Technically we should see them beating but we can't have everything. The special effects people on Caves of Androzani get  top marks for their depiction of the Doctor's anatomy in 1984. Sadly this was forgotten by the time of the 1996 big budget movie.
Posted by Eamonn Clarke at 8:20 PM