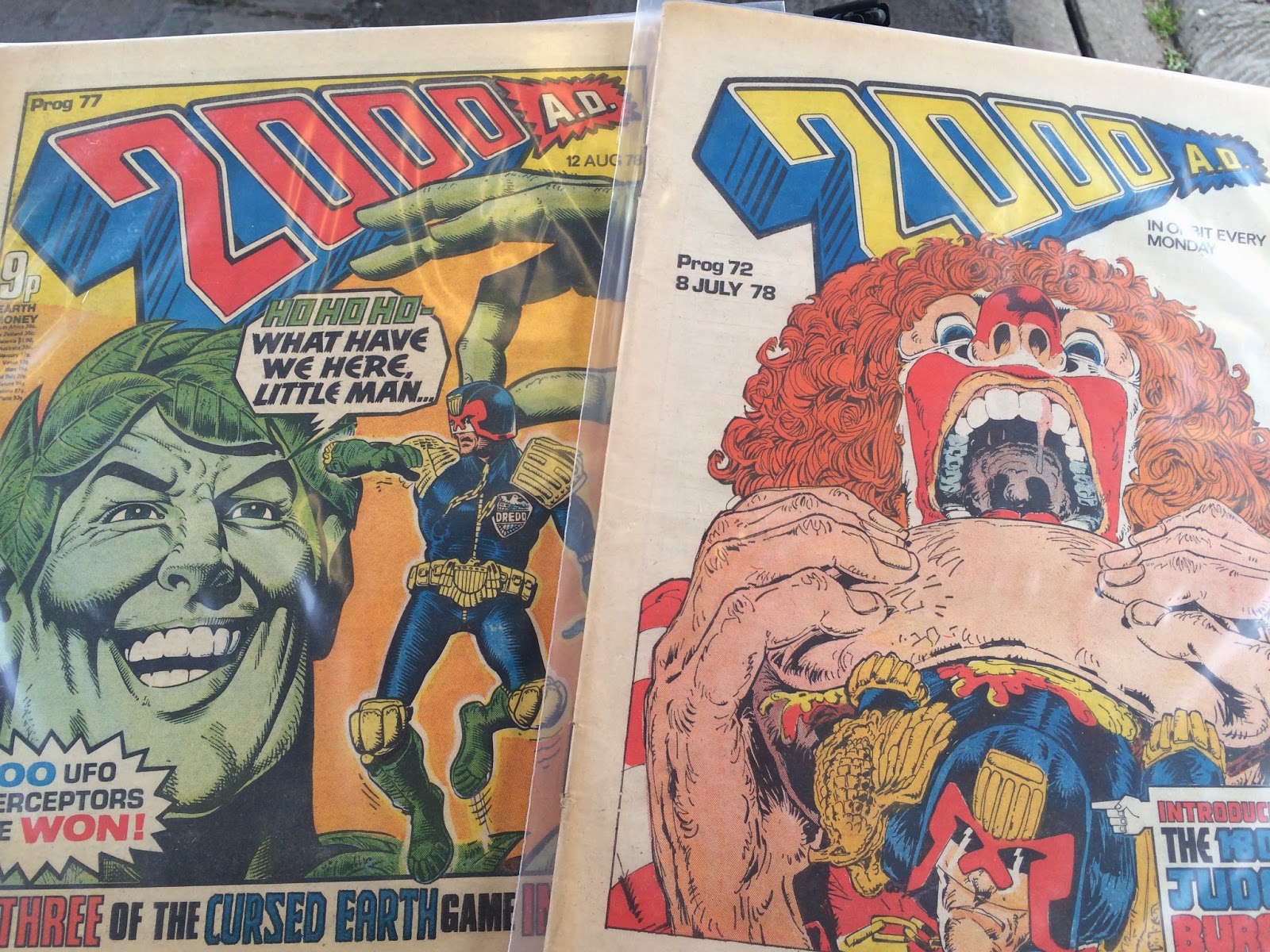 So there I was in Orbital comics getting some of the Droids to sign my copy of Day of Chaos: Fallout when I spotted these two on the wall and just had to buy them. The infamous 'banned' story-lines that nearly got 2000AD into serious legal trouble and have never been reprinted in any of the trades. They received the late 1970s equivalent of a 'cease and desist' letter from one of the companies involved and had to make an agreement to print an apology and never reprint the stories rather than face what could have been an expensive lawsuit. On a recent podcast Keith Richardson claimed that the stories themselves were not all that good and fans would be pretty disappointed by them if they were reprinted. Was he right?

Cover comparison. We have Dredd getting chomped on a Mike McMahon cover versus a dangling Dredd by Brian Bolland. Both covers feature the trademark characters that provoked the trouble. Although McMahon produced some of the all time great Dredd covers this isn't one of them and Bolland wins out.

Inside Prog 72 we have the second part of the Burger Wars storyline with Dredd and Spikes Harvey Rotten in big trouble before Judge Jack and the Land Raider save the day, In Prog 77 Dredd is plucked out of long grass by the Jolly Green Giant in the first part of the Soul Food story. Several other copyright characters appear as well. Neither of them are that bad as episodes in themselves, and certainly no more crazy than anything else in the Cursed Earth saga, or the Judge Child quest. Although Bolland wins the cover battle the interior art from McMahon and the fact that it's John Wagner on script duties for Burger Wars just gives this one the edge.

Elsewhere in these two issues we have a Mach Zero story by Steve MacManus and Mike Donaldson, Ant Wars by Gerry Finley-Day and Jose Luis Ferrer, Inferno by Ton Tully and Belardinelli, two episodes of Dan Dare by Chris Lowder and Dave Gibbons, a Future Shock by Chris Stevens and Pierre Frisano, and another Ant Wars by Finley-Day and Alfonso Azpiri,

Prog 77 also features the second episode of the Robo-Hunter: Verdus story by John Wagner, Ian Gibson and Jose Luis Ferrer. This is the one where faster than light travel de-ages Sam Slade and also turns the ship's Commander Kidd into his cynical, wisecracking baby sidekick. An important moment but Ferrer's straight forward artwork lacks the punchy humour of the Ian Gibson stuff.

Honestly they are both pretty good issues by themselves and I haven't even got to the beauty of Dave Gibbons' art on Dan Dare yet. Prog 72 has a Whittle score of three, and 77 has a solitary one. Worthy additions to my (or anyone's) collection.