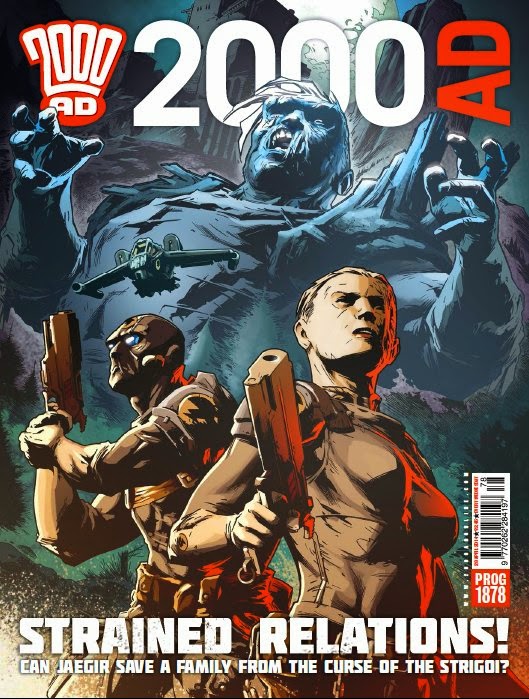 Cover by Simon Coleby and Len O'Grady. The figure of the Strigoi gives me a nice Hammer horror feel which I like. However the colours are a bit dull and it probably won't trouble the scorers much when it comes time to vote for cover of the year.

Judge Dredd: Mega-City Confidential part 5 by John Wagner, Colin MacNeil, Chris Blythe and Annie Parkhouse
And the grim secret of Section 7 is revealed to be a total surveillance project which causes yet more rioting in the streets. Interestingly Dredd is opposed to the project and his thoughts as he attempts to clear up the loose ends are perhaps the most interesting thing about this whole episode. There's been frequent mentions of Dredd's "woolgathering" in recent story lines, as he becomes a more thoughtful and interesting character.

The way that Blixen reveals the truth is a bit weird. To prove that the Judges are breaching citizens' privacy he does exactly the same by revealing secrets about a number of individuals on an international broadcast. Not exactly the actions of a declared liberal.

The cost of the Section 7 project bothers me as well. I'm not sure how the Justice department could afford to install all the hidden surveillance equipment when the blocks were being rebuilt after Chaos day. In fact the economics of Mega-City One are a bit of a mystery. With 90% of the population on welfare how do they generate any revenue at all?

Anyhow Wagner hits the reset button at the end of this tale but it has been good stuff. MacNeil's art has been great throughout with superb colour work from Chris Blythe. Top thrill.

Outlier part 5 by T.C.Eglington, Karl Richardson and Annie Parkhouse.
The grim and nasty science fiction revenge thriller gets grimmer and nastier. There is some talk on the forums as to whether the alien torture scene goes too far for a comic book. Eglington and Richardson want us to know that the Hurde are something completely alien and terrible and eventually they have to show us something to prove that, and we are left in no doubt after the flashback sequence in this Prog.

The question is where does this go from here? Caul appears completely indestructible and Carcer the investigator with the bionic eyes has not really been given any further character development. I'm not sure if this is going to be recurring story for 2000AD or if there is a definite ending approaching, but it still has me hooked.

Slaine A Simple Killing part 5 by Pat Mills, Simon Davis and Ellie De Ville
Quite a lot of standing around talking before Sinead demonstrates why you should be careful about what you do with your piercings. The painted art still looks lovely but my interest is waning.

Sinister Dexter: The Generican Dream part 5 by Dan Abnett, Smudge and Ellie De Ville
Nope, still not doing it. Five stories in every Prog and one is a dud. Still good value at £2.45 though.

Jaegir: Strigoi part 5 by Gordon Rennie, Simon Coleby, Len O'Grady and Simon Bowland
The Hammer theme continues with more flashbacks and glimpses of the creepy castle on the hill before the ending gives the plot a new twist. If Wagner and MacNeil were not dominating proceedings with Dredd then this would be the best thing in the comic at the moment. Lovely colours and a great atmosphere in the slowly building story.

What about the prog as a whole? The cover is muted, Judge Dredd and Jaegir are both on top form but Slaine and Sinister Dexter are idling, and there is the unpleasantness in Outlier which leaves me feeling that this Prog was good but not great.

Pick of the Prog: Dredd wins again but next week the first team take to the bench and the subs get a chance to shine.
Posted by Eamonn Clarke at 9:11 PM