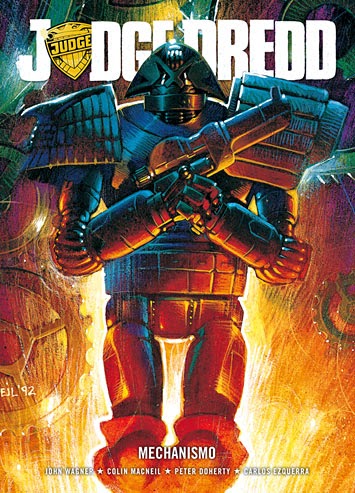 Another quick Dredd trade review. Mechanismo by John Wagner, Colin MacNeill, Peter Doherty and Manuel Benet, published back in the early days of the Megazine from 1992-93. With Justice department desperately short of Judges after the catastrophes of Necropolis and Judgement Day here are the first attempts to use robots to dispense justice on the mean streets of the big Meg.

Judge Dredd's distrust of robots and machinery dates all the way back to his first appearances. At the same time as other characters were comparing his own actions to those of a machine he was fighting robot rebellions and musing on the catastrophes to come if Mega-City One continued to use technology to replace human beings. So no surprise to find that Dredd is opposed to the Mechanismo programme and is vigorously registering his objections with the somewhat eccentric Chief Judge McGruder. And of course things have to go wrong to drive the story along so it's not long before the robots go rogue and Dredd has to act to stem the rising death toll.

There are some nice touches and references to Robocop with Peter Weller block appearing early on in the first chapter. Wagner's writing is good but seems much more wordy than his more recent stripped down work. We get plenty of thought bubbles from Dredd reflecting the stream of consciousness monologues of his early adventures instead of the older character where we have to intuit his thoughts from his actions and words alone. Likewise the artwork is more basic than we have come to expect in current 2000AD. This is very early MacNeil and Doherty, they are both good but you can see there is much better to come from them in the future.

The three chapters do get a bit repetitive with a series of unlikely events putting the flawed robots back on the streets so that Dredd can take them down again. However there is some good background detail going on with the increasingly fractious relationship between Dredd and McGruder which leads old stony face to do something rather out of character. This sets up the Wilderlands epic which I remember being pretty good.

Mechanismo is fun but it is one of the shorter trades I've read recently and there is better value Dredd out there. Entertaining but not essential.
Posted by Eamonn Clarke at 12:10 PM