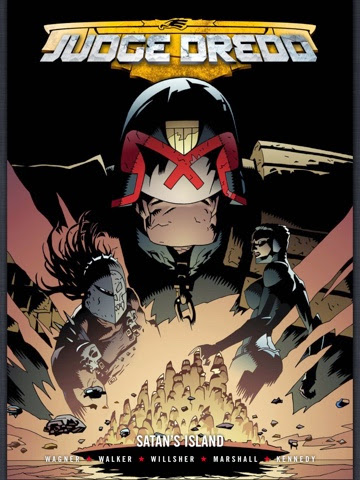 Here's another collection from my 2000AD gap years, and it's one I picked up after a suggestion from Flintlockjaw from the ECBT2000AD podcast about other Dredd stories which featured biological warfare. This one concerns the arrival of the floating Sin City in the waters off the coast of Mega-City One. With no laws on board it allows visiting citizens to gamble and debauch themselves to their hearts content while the Judges can only look on with disapproval. Chief Judge Hershey ostensibly allows it because it brings in much needed revenue for the Meg's coffers but her ulterior motive is the hunt for a wanted terrorist agent rumoured to be on board the pontooned palace of perversion, and naturally she sends Dredd to head up the investigation.

As ever the civilians get up to all kinds of futuristic nonsense and inevitably the terrorist is revealed and there is mayhem aplenty as one of Dredd's oldest foes steps out of the shadows. Look away now if you don't want any spoilers but it's that man again, Orlok the assassin is back and he's carrying vials of another deadly microbe to unleash on the unsuspecting citizens of the big Meg. This time it's a bacterium as opposed to the block mania neurotoxin that kicked off the Apocalypse War but it does seem that the Sov Judges are a bit repetitive in their attacks. Presumably all meetings of the Polit bureau feature some bright spark asking if they have ever considered weakening their enemies by poisoning their water supply first?

The recent IDW collection of the Apocalypse War led me to muse on how these comic book stories reflect society's fears at the time they were written, and made me almost nostalgic for the nuclear paranoia of the 1980s. Even further back in the 1950s when the space race was just getting started comics were full of mysterious invaders from other planets, and all sorts of heroes were gaining powers from strangely glowing meteorites. In 1963 the amazing Spider-Man, like most of his fellow Marvel superheroes, gained his powers from radioactivity but by the time it came to his first big movie in 2002 we seemed to have all lost our fear of the power of the atom and the spider that bites Tobey Maguire represents another branch of scary science, genetic modification. Although ten years later when they rebooted we seemed to have decided that GM was no big deal after all and it was, once again, an atomic powered arachnid that led Andrew Garfield to don the red and blue unitard. Maybe it was the fear of some terrorist with a dirty bomb that pushed radioactivity back to the top of the lethal list, or perhaps the writers just loved that line about radioactive blood from the cartoon show song. And to continue my theme I bet there were all sorts of comics in the 1970s about environmental concerns, Swamp Thing was created in that decade and he would go on to be at the forefront of Alan Moore's stories about man's careless attitude to his home planet.

One of John Wagner's great talents is how he uses the Dredd strip to satirise so many of the stranger aspects of our own modern lives, and he certainly knows what frightens us. Whether it is the horrors of nuclear war or the flesh eating terror of a contagious disease with a 90% mortality rate. This series originally appeared in 2002 so possibly Wagner had New Labour's plans to introduce super-casinos to the UK in his mind rather than our fear of a microbiological catastrophe, but reading it now when Ebola victims in Africa are literally bleeding from their eyes is a sobering experience.

In the case of Orlok the agent he releases here is said to be a bacterium which means that Wagner has run the full gamut of different microbial menaces. It was a virus with the catchy name of 2T(FRU)T which infected Mega-City Two and led Dredd to make his epic trek across the Cursed Earth. In 1982 the Judges had to deal with a lethal Fungal infection that left victims growing a nasty crop of mushrooms on their skin. And to bring things right up to date the Chaos Day organism was based on a Protozoa called Toxoplasma Gondii. The Block Mania agent is, I think, just referred to as a toxin so I presume it was something pharmacological that sent the citizens crazy and not a bug. That only leaves a few rare wee beasties for the Sovs to try unleashing on the big Meg.

Turning back to this volume there is terrific art from the accomplished Kev Walker and some very early Ben Willsher on the sequel Orlok story from Prog 1303. Then Paul Marshall and Cam Kennedy illustrate the last stories which puts Orlok on trial. All three of these back up stories are coloured by Chris Blythe and the whole volume is lettered by Tom Frame. It's another fine Dredd collection which was a pleasure to read, and so cheap and easy to download on the iPad app. Four stars and recommended.

Posted by Eamonn Clarke at 2:30 PM