Double thrills from the postie again and time for the monthly head to head. 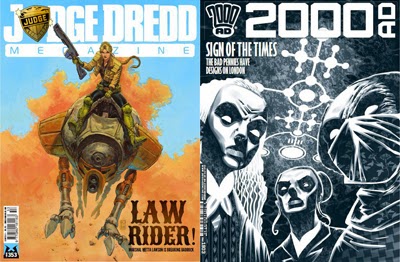 Covers. Phil Winslade on the Megazine versus D'Israeli doing Stickleback on the Prog.
Two dramatic and eye catching covers. Winslade delivers something that recalls all those great science fiction pulp magazines or cheap paperbacks from the sixties and seventies. It's a great image and the colours make it pop off the newsstand. Normally I'm an absolute sucker for D'Israeli's richly textured black and white covers but this one suffers from not having the title character himself. In fact the three bad pennies haven't really been delineated in the strip so their significance is vague at the moment. If it was last year's marvelous image of Stickleback emerging dripping from the tank it would be a different matter but the colourful Megazine cover scores the first goal this month.
1-0 to the Meg

Judge Dredd Dead Zone by John Wagner, Henry Flint and Annie Parkhouse versus Block Judge by Wagner, Carlos Ezquerra and Annie Parkhouse.
What a surfeit of riches. The best classic era creator team up against the best modern team. It is impossible to tell them apart. In Block Judge Wagner and Ezquerra deliver the day to day details of Dredd's police work in fascinating sequences. And Dead Zone evolves into something different to what we first thought it would be. Both stories are maximum thrill power from the house of Tharg. This one has to be a draw, one point each.
2-1 to the Meg

Lawless by Dan Abnett, Phil Winslade and Ellie de Ville versus Stickleback by Ian Edgington, D'Israeli and Ellie de Ville.
Now we have two proponents of the best black and white artwork you will see in comics anywhere this month. And such different styles, Winslade produces incredible details in the crowded backgrounds and the story runs on nicely in its Deadwood in space style. Meanwhile D'Israeli produces another master class of texture work in the latest installment of Stickleback. I love all of Edgington and D'Israeli's output and this is no exception. Superb stuff from both comics but a win for Stickleback.
2-2.

The Man from the Ministry by Gordon Rennie, Kev Hopgood and Simon Bowland versus Greysuit by Pat Mills, John Higgins, Sally Hurst and Ellie de Ville
I have really enjoyed The Man from the Ministry series and like the Matter of Life and Death references in this last episode. I could have done with some more British science fiction nods along the way but surely they will turn up in future stories. Greysuit looks good and it is written by Uncle Pat but it is only just getting going so I'm going to give this round to the Meg.
3-2 to the Meg

Uprise by Arthur Wyatt, Paul Davidson, Chris Blythe and Simon Bowland versus Ichabod Azrael by Rob Williams, Michael Dowling and Annie Parkhouse
All forms of Judges on display in Uprise: undercover, corrupt, rookie, robot and hard as nails Dredd himself. This is so much better that the Underbelly story. Wyatt seems to be developing a feel for how this different Dredd universe works and I'm hooked. Strangely I even prefer Davidson's artwork, I like Henry Flint to be on classic Dredd and not the film version.

I'm still not on top of the back story of Ichabod Azrael although Michael Dowling's art still reminds of the beautiful John Ridgeway work on the Dead Man saga. It's astonishing how different his black and white stuff looks compared with the recent colour landscapes he did in Dead End.
The result is another surprise win for Uprise which is good stuff, and look at what's coming next month with Boo Cook's action packed cover.
4-2 to the Meg

Lobster Random by Simpon Spurrier, Carl Critchlow, Ian Richardson and David Roach versus Kingdom by Dan Abnett, Richard Elson, Abigail Ryder and Simon Bowland.
I've read this Lobster Random before and it's all just mental nonsense from Spurrier's twisted imagination, and that's a good thing. In Kingdom Gene and co, catch breath before it's time for them to "Get whet!" again and the big onslaught of Aux Drift begins. It's a pity this can't transfer to the Meg and have a few more pages for each installment which might allow some more story elements to develop in between bug slashing mayhem.

Final result is a 5-2 walkover for the Megazine but the quality in the Prog is astonishingly high as well. It is a new golden age for 2000AD and long may it continue.

Posted by Eamonn Clarke at 9:48 AM