Big Finish release number 65 - The Juggernauts with Colin Baker as the Sixth Doctor, Bonnie Langford as Mel, and Terry Molloy as Davros. Written by Scott Alan Woodard and directed by Gary Russell. This was one of a bundle of Big Finish CDs that I picked up cheaply on eBay, and yes I did get it signed at Big Finish day. 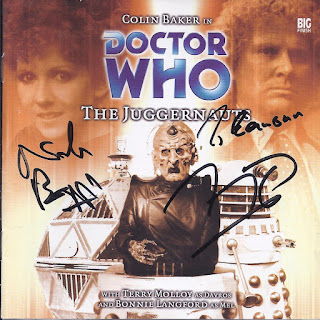 The Doctor and Mel are separated on a mining colony, there's some strange new machines, and there is Davros. But it's a strange version of Davros who seems to have charmed everyone except for the Doctor.

I love a Davros story. There's something about his repeated battle of wills with the Doctor that is fascinating. All the monsters are great, but for many of them it's just about marching in and destroying everything in their paths. With Davros and the Doctor it's a clash of ideologies, two great minds that are destined to keep encountering each other and fight it out with words as their weapons.

Terry Molloy is fantastic, and Bonnie Langford is very good. I have no previous experience with her character Mel but she was fine here. And there's Colin Baker as the Sixth. So here is the thing, I still have not seen any of the Sixth Doctor stories from the television series. And yes, I am going to have to correct that soon. But I'm really learning to enjoy his character in these Big Finish stories.

Anyway, this is a great story and I haven't even mentioned Nick Briggs as the mechonoid voices. This gets a smooth rolling 4 out of 5 evil, robotic arms. Next up is another Eighth Doctor story: Memory Lane.
Posted by Eamonn Clarke at 6:40 PM