The Doctor Who Experience - a review

So the final event for Brian from Canada's trip was a visit to the Doctor Who Experience at the Olympia exhibition centre in London. This is an interactive walk through adventure similar to some of the rides that I remember from Disneyland. After a brief bit of queuing and ticket checking we were ushered into a large room where a video screen showed clips from Doctor Who before splitting down a central "crack in time" to lead us into the next room where more stuff happened, and so on. Matt Smith has filmed some special sequences as the Eleventh Doctor to set up the story of the experience and then there are various lighting, sound, animated monsters and other special effects to give you that full interactive feeling. 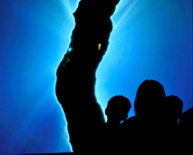 It was mostly based on the new Doctor Who and was clearly aimed at families with children of which there were several present. But for a Who fan of any age it was pretty entertaining. At one stage a clever lighting and sound effect reveals the Tardis "materialising" in the corner of the room. Then the door swings open and you walk inside, down a short corridor and into the Tardis control room itself. It's impossible not to find that exciting! 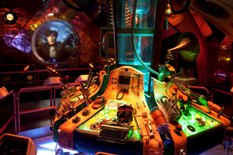 After the interactive experience which lasts about 25 minutes you emerge into the Doctor Who exhibition which includes lots of stuff from the classic series. So there are all the Doctor's costumes, lots of monsters, replicas of previous Tardis control rooms, and various bits of hands-on stuff to keep the children entertained. It was great to see the kids being introduced to some of the older Doctors and learn that the series existed long before they were born. Another form of time travel. 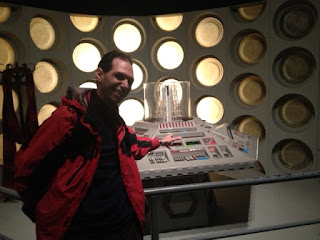 At one point in the exhibition there is a Dalek with the back half removed so that children could step inside it and operate the gun and the manipulator arm. I watched one boy try to operate the controls while his parents took a photo. Then as I walked on past the front of the Dalek he must have pulled a lever and the suction cup suddenly swung and grabbed my elbow. His mother tried to apologise but I told her it was fantastic and how for a spilt-second I had found it genuinely terrifying!

The Doctor Who Experience has finished its run in London and now moves to a permanent home in Cardiff. While it is primarily for families it is a great trip for any Doctor Who fan and I would heartily recommend it.
Posted by Eamonn Clarke at 8:51 AM