The rest of the Sunday at LSCC was spent happily browsing through the back issue boxes and completing my collections of both the 1972 Swamp Thing series and the 1974 Man-Thing. I also got a chance to meet the writer Tony Lee who wrote a fantastic Doctor Who comic called The Forgotten. He signed my first issue and pointed out that the cover artist Nick Roche was also at the IDW booth, and he signed my cover as well. 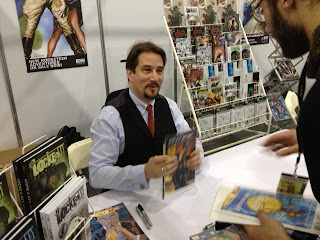 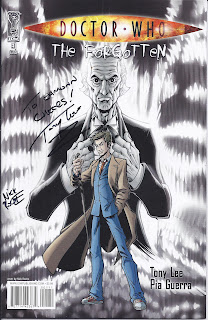 The last queue of the weekend was to meet the great artist, George Pérez. I wanted to get him to sign my copy of Crisis on Infinite Earths #1. After the problems with the Brian Bolland queue on Saturday I was pleased to see that the convention staff had things better organised. They closed off the line shortly after I joined it and and announced that everybody in the line would get up to two books signed by George. They turned a lot of people away which was obviously disappointing for them, but better than having to queue for an hour only to be sent away empty handed.


Mr Perez himself was thoroughly charming, with a friendly word for everybody and handshakes and photos all round. Here he is signing my book. 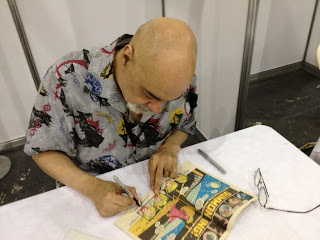 And here is the book itself. 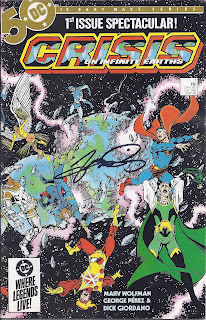 I had a fantastic time at the London Super Comic-Convention. If you get the chance to go next year you should. I'll certainly be back for more.
Posted by Eamonn Clarke at 11:07 AM