Alan Davis has drawn Miracleman, the Fantastic Four, X-men, the JLA and he was the artist on my favourite Captain Britain story of all time: the Jasper's Warp. He was a little more brisk and businesslike than Dave Gibbons. He was doing more detailed sketches for £10 a go which did slow things down a bit. There were also several blokes in the line who seemed to have brought an entire library of books for him to sign which created a few grumbles. Anyway I got to meet him and thank him for Captain Britain. The first book I got signed was another Amazing Heroes issue with a fairly well known cover. 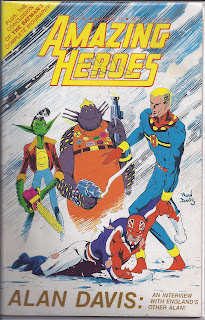 I also had issue 3 of the Marvel UK run of Captain Britain just because I liked the cover so much. Again this issue made him pause and flick through the pages commenting on what good condition it was in and asking if I had bought it when it first came out, which I had.

It must get repetitive just signing the same books over and over again. If I go to any more signings I will definitely try to dig out some more obscure items to bring along as that seems to amuse the creators and generate some chat.

Anyway here's Captain Britain #3 which will soon be framed and on my office wall. 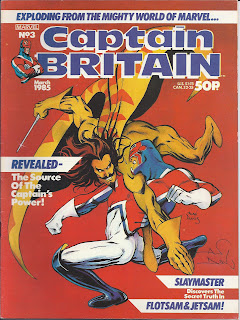 Posted by Eamonn Clarke at 2:55 PM