Day 22 - A comic book second volume which disappointed you.

The obvious choice would be The Dark Knight Strikes Again, the sequel to the fantastic Dark Knight Returns, which is apparently terrible but its reputation is so poor I haven't actually read it. The first stories of the Ultimates where a terrific wide-screen approach to the Avengers in Marvel's Ultimate universe. The look of the characters will undoubtedly influence next year's Avengers movie. But the Ultimates 2 was really disappointing, especially so as it featured good old Captain Britain. 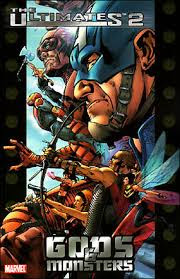 Posted by Eamonn Clarke at 5:48 PM