Day 19 - Comic book city/universe you wish you lived in

Well I may as well plug my annotations page again. The Scarlet Traces universe contains such a neat idea that I almost slapped my forehead when I first read about it. The idea that the British Empire took the Martian technology left at the end of the War of the Worlds and used it to maintain and extend the empire is so obvious that I would be surprised if hadn't been used in other fiction. Let me know of any other examples. Now it has to be said that by the time of the third volume the British Empire is not very nice but there are suggestions towards the end that changes are afoot. It would be an interesting place to live, especially if I could have the cool car used by the two men from the ministry at the end of the book. 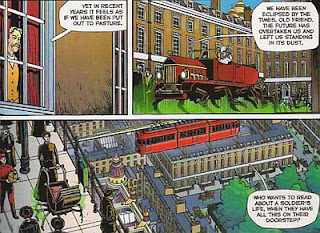 Posted by Eamonn Clarke at 1:35 PM