Mr Gibbons is most famous for Watchmen of course, but over the years he has drawn Superman, Martha Washington, Doctor Who and just loads of great comics. I queued for about 30 minutes to get him to sign a couple of my books. He was an absolutely charming chap who had something to say to everyone in the line. He was signing books, doing very quick head sketches of Rorschach, posing for photos and generally being a true gentleman.

Most people were carrying copies of Watchmen for him to sign but I thought I would bring some slightly more obscure comics from my collection. So I found this Watchmen cover he did for an issue of the Amazing Heroes fanzine. 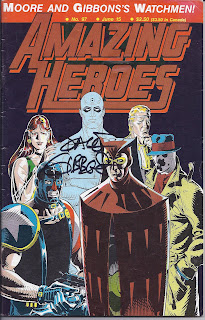 And a lovely cover he did for Action Comics in 1988 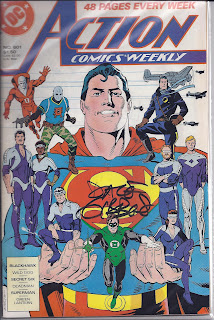 Dave Gibbons greeted them as if they were old friends and was delighted to see them. We spoke briefly about the covers while he signed them and I thanked him for the enjoyment that I've had reading his comics over the last 30 years. It was a real pleasure to meet him.
Posted by Eamonn Clarke at 2:41 PM